Not in a jotty mood. But C.I. made me laugh with "Other Items" this morning:

There's a "White House Memo" that Carl e-mails about. He wonders whether it will get the sort of ridicule that it deserves and that a "White House Letter" by Elisabeth Bumiller would? Good question.
It's entitled "Press Secretary on Trial in the Briefing Room" and attempts to provide you with the crashing waves that have threatened the love tunnel that exists between the press and Scott McClellan. Stretch praises him. Elite Fluff Patrol squad member Richard W. Stevenson blows air kisses. See, Scotty said Karl Rove and Scooter Libby weren't involved in the outing of Valerie Plame and now that the "public record" demonstrates that this false, poor Scotty and poor press just aren't sure, as Dionne Warwick once sang, what to do with themselves.
It's a tough time for both sides. All those expectations. All those laughs. Could it all be coming to end? He fed them, they stroked him. It was a mutal love affair born of self-interests on both sides. So Stevenson uses terms like "unwilling or unable" (is he charting on patients?) to attempt to explain the bind Scotty finds himself in (although it applies equally as well to what passes for the press). If Scotty comes out and speaks the truth (highly unlikely considering the administration he serves in), Karl Rove might go ballistic on him.What's Scotty to do?Stevenson frets and worries.It's all so very "Victim of Romance:"

Sing it, Stevenson, sing it!
("Victim of Romance" is written by John Martin. I'll plug Michelle Phillips' version which is available on the album of the same name and which Hip-O Select released this year on CD.)
"A member of a prominent Texas political family, he was viewed by many reporters when he took the job as genial and straightforward but difficult to knock off the White House's talking points," Stevenson all but sobs into pillow.
Stevenson reassures us that, in all the madness, Scotty's high roaded it and "has instead appealed to the better instincts of his journalistic inquisitors." Yes, he can't stop singing "Victim of Romance:"

It certainly is. It certainly is a crime what Scotty's done to Richie's spine. A victim . . . a victim. . . Stevenson's just a victim of romance.Hopefully, it will all be worked out in time for home coming. I'd hate to think Richie might miss getting pinned by Scotty.


the new york times
richard w. stevenson
the common ills
Posted by Wally at 7:35 AM 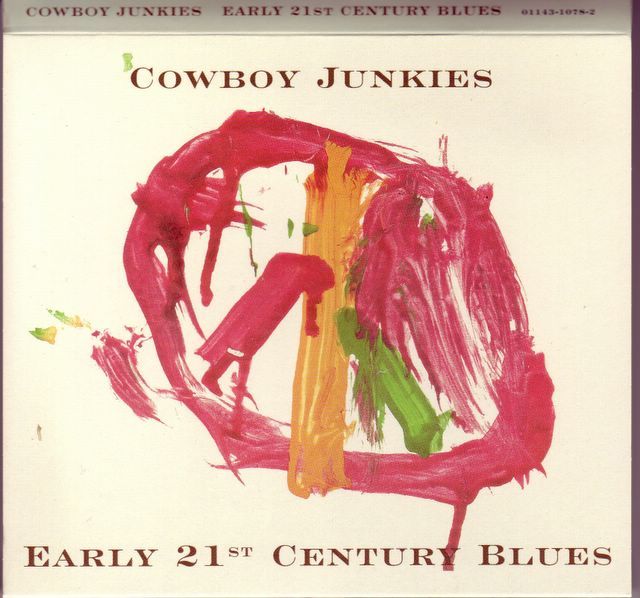 Just got off the phone with C.I. and hope everyone who can will participate in the World Can't Wait events. It's important to be counted if you're able to.

The photo above is a peace sign from the cover of The Cowboy Junkies' Early 21st Century Blues CD. That's a really good CD, so check it out. The first thing I ever did with The Third Estate Sunday Review was help with their review of that and Dolly Parton's Those Were The Days. Mike had called me earlier that Saturday saying, "You got to get The Cowboy Junkies!" over and over, so I did. Good CD. It'll soothe you. Unless, like me, you're in Florida wondering where the hell the national media is?

While we were on the phone, I got C.I. to read the New York Times' coverage of Florida from today and yesterday.

Florida: Fishing ban is overturned
A two-month ban on recreational grouper fishing in the Gulf of Mexico was overturned Monday, a day before it was scheduled to go into effect. Judge John E. Steele of Federal District Court ruled that federal officials went too far when they outlawed all grouper fishing to protect one species, red grouper. The restrictions were to have established a closed season for grouper in November and December in federal waters and reduced the daily bag limit of the fish to one from two. The decision means that many species of grouper can be caught in federal waters, beyond nine miles offshore in the Gulf. Red grouper remains off limits in those waters through December.

That's an Associated Press thing (in full) from "National Briefing."

Florida: Trick-or-Treaters told to proceed with caution
Government officials in South Florida urged parents not to let their children go trick-or-treating after dark because of power failures and fallen power lines affecting much of the area a week after Hurricane Wilma. "If your kids don't need to go door to door trick-or-treating this year, they probably shouldn't," Lt. Bill Schwartz of the Miami police said. "If you can find an alternative like a mall, we highly recommend it." Public schools in Boward Country were closed through at least tomorrow and in Miami-Dade through today. Florida Power and Light said it had restored power to about 25 percent of the 3.3 million people who lost power after the hurricane. But it said some areas might not get power back until Nov. 22.

It sure is nice to be a "briefing." I asked C.I., when NYC had their day of blackout, how did that play in the paper of record? Front paged. No surprise there.

On the trick-or-treating, it was also because of "debris" from the hurricane and it was much stronger here than the Associated Press paragraph lets on. Then we're reading that 25% of the people who lost power have had it restored. But in some radio reports they say 77%. I don't think anyone's gotten an honest accounting and I don't think they'll get one because the national press isn't interested in this story.

Let me tell you what else you're not being told by the national paper of record. Jeb Bush called off city elections that were to have taken place yesterday in Miami-Dade (including the election of Miami's mayor). Students are missing classes because of the damage done by the hurricane and the lack of a quick response. Jeb's offering waivers because the school's won't meet the compliance demands. Depeche Mode has cancelled their concert, the one that was to kick start their tour, scheduled in Fort Lauderdale. You hearing much about the way it's effecting migrant farm workers?

Maybe if we talk about the effect it's had on college football, some might pay attention?

Did you hear about Tuesday's rainfall? In Broward, you had an apartment complex's roof cave in due to the damage from the hurricane combined with yesterday's rain. They're saying 500 people are now homeless. This story didn't end when the hurricane swept through Florida but the national media acts like it has. You've got complexes and condos that are unsafe and people wondering where they're supposed to go.

And guess what one answer was in Miami? You could stay overnight at a motel. The motel didn't have electricity, but you could stay there. And this "solution" came from the city government.

Tomorrow I'll try to be my usual smart ass self. This isn't supposed to be The Daily Florida. But one day without power in NYC is a massive, national news story. What happens in Florida isn't apparently cause for concern. But when a fishing ban is overturned, count on the New York Times to give you that news.

If I was on campus and classes were going on (some campuses are suffering from power shortages as well), I'd walk out at noon to honor World Can't Wait. If you're able to, I hope you will. Peace. 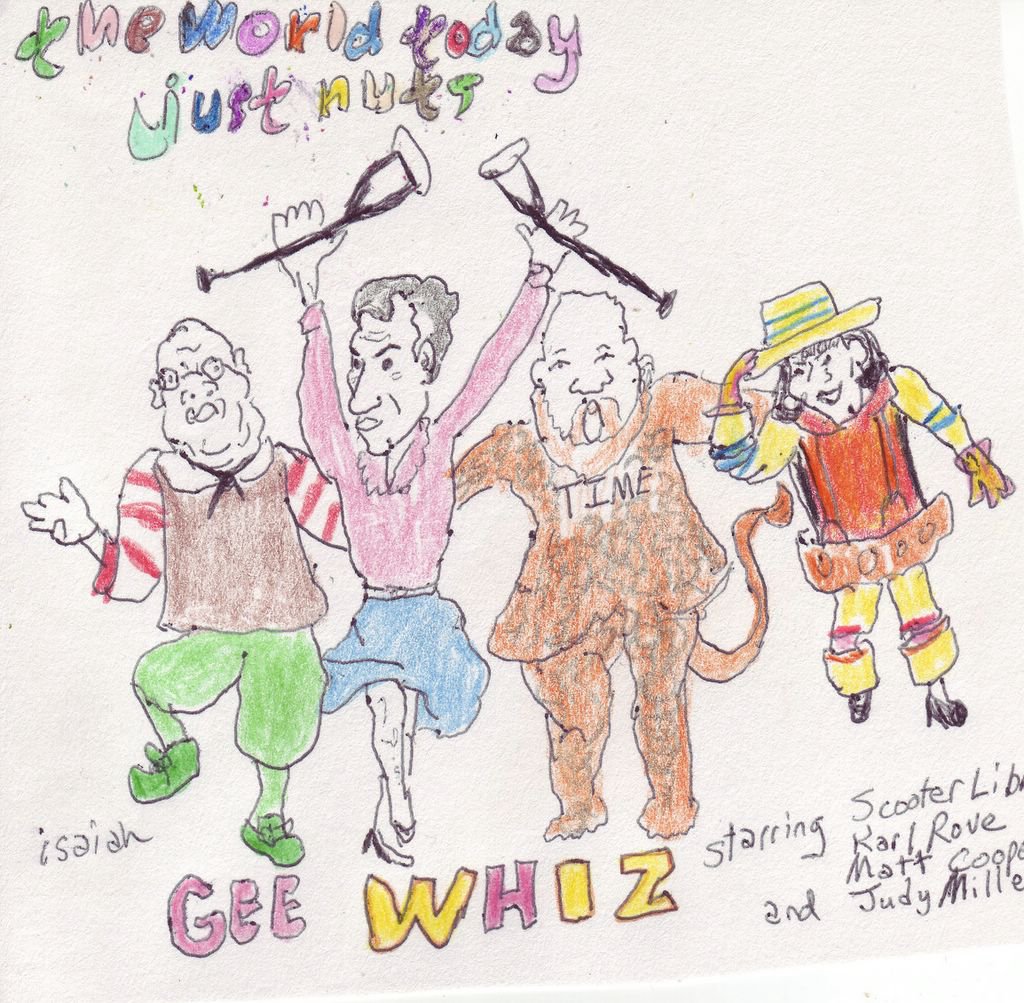 I think about Isaiah's latest The World Today Just Nuts as I wonder where the national media is on what's going on in Florida? They're cozying up to the power. There's Judy Miller and Matthew Cooper making nice with Karl Rove and Scooter Libby, laughing and grinning, as they scoot on down the road. Is it any wonder that they have no interest in any story that actually effects the people? Or as the mainstream press might call us, "the little people."