IF SUCCESSFUL, THE PLAN WILL PROVE THAT ANYONE CAN LOSE WEIGHT -- EVEN SOMEONE AS HUGE AS MOORE.

Another US death in Iraq.  Yesterday, it was announced that "Pfc. Brian Patrick Odiorne" died in Iraq.

Death of a Fort Hood Soldier

FORT HOOD, Texas -- The Department of Defense announced Feb. 21 the death of a Fort Hood Soldier who died Feb. 20, in Al Anbar Province, Iraq, from a non-combat related incident while supporting Operation Inherent Resolve.
Pfc. Brian Patrick Odiorne, 21, whose home of record is listed as Ware, Massachusetts, entered active-duty military service in October 2015 as a cannon crewmember.
He was assigned to 2nd Battalion, 82nd Field Artillery Regiment, 3rd Brigade Combat Team, 1st Cavalry Division, Fort Hood, Texas, since May 2016.
Odiorne's awards and decorations include the National Defense Service Medal, Global War on Terrorism Service Medal and Army Service Medal. He will be posthumously awarded the Inherent Resolve Campaign Medal and Overseas Service Ribbon.
Circumstances surrounding the incident are currently under investigation by Special Agents from the U.S. Army Criminal Investigation Command.
No further information will be released at this time to protect the integrity of the ongoing investigative process.

Which usually means, "Let's stall until the press loses interest."

Another American who should have been somewhere else, not being used to continue the never-ending Iraq War -- a war that his 14 years next month.

And Barack swore he would end it.

He's a War Criminal and so is Bully Boy Bush.


Mike Glenn (HOUSTON CHRONICLE) notes, "Odiorne was originally from Ware, Mass. - about 80 miles west of Boston. He joined the Army in October 2015 and had been at Ford Hood since May 2016."  Anthony Fay and Hayley Crombleholme (WWLP) report, "Since May, Odiorone had been assigned to the 2nd Battalion, 82nd Field Artillery Regiment, 3rd Brigade Combat Team, and 1st Cavalry Division out of Fort Hood, Texas. He entered active-duty service as a cannon crewmember in 2015."

Steve Wightman‏@stevewightman1  10h10 hours ago
Honoring #USArmy PFC Brian P Odiorne, died Feb 20, 2017 in Iraq. Honor him so he is not forgotten.

Odiorne's loved ones said that he stayed in touch with them even when he was busy.
"Even if we didn't get to talk until the next day, we'll make sure that we at least keep in touch, like 'Hey, I'm okay, I'm letting you know I'm safe'," [Kelsie] Delisle added.
Delisle spoke to Odiorne on the phone every night, including Sunday - the night before he died.
"We'd always tell each other every night, when we hung up, that we missed each other and we loved each other and I'll talk to you tomorrow," Delisle explained.
That's what they told each other Sunday night, but Delisle found out about her close friend's death Monday morning after reading a post on Facebook.
"I don't know what to do and I have not stopped crying since then because it feels like I lost a part of me," Delisle said.

I can't believe what I'm hearing... I had just received a message from you the other day asking to check up on your grandmother for you every now and then since you can't always talk to her. I promise I will visit her. This is just so surreal. You were such a kind, gentle, caring person who's heart was as big as your smile. Thank you for serving our country, RIP Brian Odiorne, you'll be missed and never forgotten.


And he notes  Molly Przybyla:

I lost the most incredible man I have ever met. Brian made me who I am today, he broke me out of my shell, and helped me be more confident and out going and I didn't get the chance to tell him that he is the love of my love, the one I was supposed to end up with. We were supposed to get back together but at least I know how he felt about me, told me he never stoped loving me, and I told him I loved him too. I will never forget him, I will always hold him in my heart forever... and noone can ever replace that he's my soul mate and his family will always be my family. I am so sorry, you guys always where there for me and I love you guys and I love you


That's about all from the western press.

THIS JUST IN! THAT'S OUR KRUGMAN! 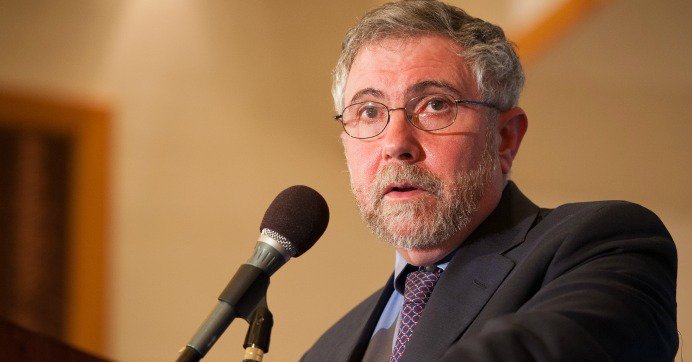 
THE SAME CIA SOURCE TELLS THESE REPORTERS THAT PAUL KRUGMAN WAS A BED WETTER UNTIL THE AGE OF 49 AND STILL WETS HIS PANTS TO THIS DAY.

SOURCE STATES THAT KRUGMAN WAS SEEING  PICKING IN HIS NOSE IN HIS NEIGHBORHOOD MCDONALDS AND WAS JUST ABOUT TO WIPE THE BUGGER ON THE WALL WHEN HE STARTED PEEING HIS DRAWERS.

THE SOURCE INSISTS PAUL KRUGMAN THEN BEGAN SHOVING MICKY DEE FRIES DOWN THE FRONT OF HIS PANTS BEFORE CROUCHING ON THE GROUND AND BARKING REPEATEDLY.

I was having a debate with a friend last night on the phone that turned into an argument.

She's an actress who can't stop her nonsense Tweets about Donald Trump being evil and the Democrats being salvation.

He may or may not be.  Time will tell.

Are Democrats the salvation?

And she was raised in a Socialist family.

And we both used to listen to Gore Vidal go on (constantly) about the boiled frog.

The Democrats are not the answer.

Maybe if they were pushed.

Susan Sarandon's pushing them.  Which is why hacks like Debra Messing get so angry.

Everyone should be pushing them.

No, you don't have a right to our votes.

And if the Democratic Party wants our votes, it damn well better try to earn those votes.

If all your money goes to rent and food, you're not making a living and we need to stop kidding otherwise.

Alyssa, my friend and I live very fortunate lives.

We need to be aware that many others are not so fortunate.

These are the people the Democratic Party has abandoned -- a party that can't even publicly mention the poor, a party that should have declared one of their so-called wars on the issue of the homeless long ago.  If 10% of what's been spent on the 'war on drugs' in any year was spent on addressing the homeless, the people would be better off.

The Democratic Party has joined the corporations in fleecing the American people.

That's not going to turn out any votes.

And Alyssa and others can tell themselves they're so damn superior to Trump or whomever because they say the right things but words don't keep a roof over your head or food on your table (unless you're a paid writer).

The Democrats need to be pressed to earn votes.

They don't need to be defended.

They have lined their pockets with corporate donations.  Nancy Pelosi is a lousy leader but gets to hold on (for now) because she brings in so much corporate cash to each election cycle.

The party's entirely about greed.

I doubt that will change.

But you can pressure them to make concessions to We The People.

And you don't do that by castigating Susan Sarandon.

You do that by saying more people are going to walk -- like Susan -- if you don't start addressing the basic needs, the reason political parties exist, which is jobs.  You're going to keep losing if you can't defend the safety net -- which needs to be increased, not gutted.