THIS JUST IN! DEBBIE THRIVES ON HATE!

POLITICO‏Verified account @politico  6h6 hours ago
A DNC member from Florida on Debbie Wasserman Schultz: "We wish she would go away" http://politi.co/2utqpu1 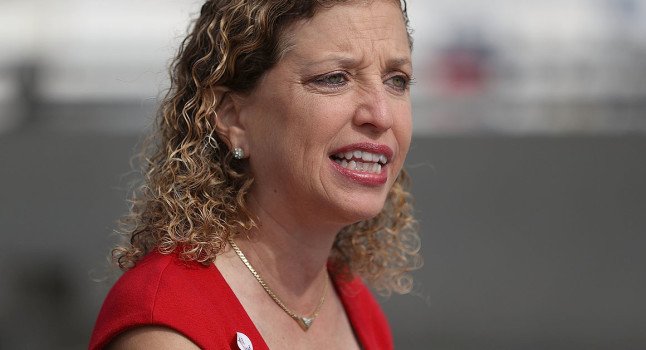 UH, POLITICO, IT'S NOT JUST 1 PERSON.

AND IT'S NOT JUST FLORIDA.

REACHED FOR COMMENT BY THESE REPORTERS, DEBBIE WASSERMAN SCHULTZ STATED, "SO I'M HATED.  SO HOW IS THIS NEWS?  IT'S NOTHING NEW.  I'VE BEEN HATED MY WHOLE LIFE.  MY OWN TEDDY BEAR RAN AWAY FROM ME AT FIVE.  YOU KNOW WHAT? I THRIVE ON IT!  IT MAKES ME STRONGER!  PRINT THAT YOU %#$%#-ERS, PRINT THAT!"

Repeatedly over the years, various think tanks -- including RAND -- have warned that this issue has the potential to be an explosive one.

Which is why you don't leave it on the backburner.


Grasp that the US military remains in Iraq.

Grasp that some will always insist that the US military remains.

The longer this issue of independence is postponed, the longer some will insist the US must remain in Iraq.

The Kurdistan Regional Government (KRG) has scheduled and insists on holding a referendum on independence for the Kurdistan Region on Sep. 25, 2017, to decide whether or not to secede from the rest of Iraq.
Barzani stated that the move toward independence is part of a peaceful process aimed at deterring violence. “The main purpose [of the referendum] is to prevent further tragedies and wars from taking place[in the future].”
Regarding the timing of the vote, the President noted that if the Kurdistan Region waited for others to accept its decision, the right time would never come.

“Independence is a legitimate claim for our people, and the referendum can rightfully be held, at the earliest opportunity, so the world can be made aware of the will of the people of Kurdistan… We do not want to spend another 100-years repeating the same tragedies tied to the Iraqi state.”

What a change that is from the Jalal Talabani -- the ridiculous Jalal.

Talabani told a Turkish newspaper in an interview published on Monday that it would not be realistic to believe that an independent Kurdish state could survive as it is likely that neighboring countries Turkey , Iran and Syria would close their borders.
"I tell my Turkish brothers not to fear that Kurds will declare independence. It is an advantage for Kurds to stay within the borders of Iraq in terms of their economic, cultural, social and political interests," he told in the interview.

Sabah got the interview and they quote Talabani stating, "Iraq will not be separated and the civil war is over" and "The ideal of a united Kurdistan is just a dream written in poetry. I do not deny that there are poems devoted to the notion of a united Kurdistan. But we can not continue to dream." If accurate, Talabani's remarks will spark anger among some Kurds. And it may be a great deal of anger and it may be among many Iraqi Kurds.


Jalal Talabani, the sell out.  The only time he ever fought was to be first in line at the all-you-can-eat buffet.

Regardless of how the vote turns out, no one can claim Barzani didn't try.

RECOMMENDED: "Iraq snapshot"
"Crooked Loretta Lynch"
"Sore loser"
"The hysteria"
"Seth Rich"
"Deb needs to answer"
"glenn greenwald on trump"
"One more time on NETFLIX"
"ROCK A LITTLE -- go on, Lilly"
"Immigration"
"You really do have to have friends"
"Debbie Washerwoman feels the burn"
"THIS JUST IN! THE VILLAGE IDIOT HAS SPOKEN!"

THIS JUST IN! THE VILLAGE IDIOT HAS SPOKEN!

JEB BUSH IS CALLING HER "INCOMPETENT."

JEB BUSH OF THE BUSH FAMILY -- A DYNASTY NOT NOTED FOR STRONG THOUGHT OR MENTAL CAPACITY.

JEB BUSH WHO LOST THE REPUBLICAN PRESIDENTIAL NOMINATION TO DONALD TRUMP IS CALLING HER "INCOMPETENT."

Do you remember, Val, that the Iraq War continues?

Valerie Plame was at war with her own agency.  The CIA is often at war with itself.  It's probably the only thing that's prevented its complete takeover of America.  Val stomped her feet and made a spectacle of herself.

For those who don't remember, she was outed by the administration of Bully Boy Bush.

For Val, the whole issue is Val.

She's never really been able to speak to Iraq, of the ongoing war, of the dead.

But damned if she couldn't hop in a convertible to pose for VANITY FAIR.

Vanity's not fair and Valerie Plame's self-obsession goes a long ways towards explaining why the United States is still in Iraq.

A book deal, Naomi Watts playing her in a movie, and Val's hungry ego has still not been satisfied.  Some day, it may be and she may get around to actually talking about Iraqis.

The Iraq War hasn't helped the people of Iraq.

Now it's even hurting the thugs in the militias.

Most infamous for their attacks on Sunnis and their publicly professed loyalty to Iran, Iraq's Shi'ite militias number a few less as a result of a US action.

A paramilitary Hashd Shaabi unit said Tuesday the U.S. forces pounded its posts near the border with Syria and killed dozens of its militants, warning that the attack will not go without punishment.
The U.S. forces carried out "heavy bombardment on Monday morning on the posts of Sayyd al-Shuhadaa Brigades in Akashat area near the border with Syria, leaving large number of martyrs and wounded fighters," the unit said in a statement emailed to Xinhua.

It said that group "holds the U.S. forces the responsibility for the consequences of the action. We declare that it will not go without punishment."

AHLULBAYT NEWS AGENCY also notes the statement from the militia:


The “criminal forces” of the US heavily pounded the positions of Sayyid al-Shuhada Brigades along the common border between Iraq and Syria which led to the martyrdom and injuring of a large number of fighters, the statement said.

“We declare that this move will not go unpunished,” the statement read.

RECOMMENDED: "Iraq snapshot"
"Iraq snapshot"
"And the war drags on . . "
" Cindy Sheehan truth telling "
"There should be consequences"
"i hate soap operas"
"I shouldn't forget Grenfell"
"There is no money in the budget for war!!!!"
"Mark Eggert -- crazy or a liar?"
"Mr. Tribe has always had intercourse with his own pie hole"
"Google the unfriendly"
"MOTHER JONES is disgusting  "
"John Grant's an idiot"