Return of the Jot

Well we spent yesterday convincing my grandfather, my mom and me, that he couldn't continue to stay in his house. He was going to Mom's for Thanksgiving anyway so yesterday morning when he said he was thinking about leaving early, we packed up some stuff and talked to a few neighbors to make sure they'd keep a watch on his house.

I took a shower and sat down to jot.

Opened the e-mails and a lot of "more on Woodward!" I think C.I.'s pretty much covered it this morning with "NYT: Woody sees his shadow and goes back underground."

On Florida, I'll note this:

A Florida businessman has sued Florida Power & Light over Hurricane Wilma's massive blackouts, accusing the state's largest power company of gross negligence in failing to maintain power poles and other equipment.
Wilma, which hit Florida on October 24, knocked out electricity to about 3.2 million FPL customers, leaving nearly 6.5 million people without lights, refrigeration or air conditioning, some for weeks.
The lawsuit, filed on Thursday in Broward County Circuit Court, seeks class-action status for the millions of people affected and alleges FPL, a unit of FPL Group Inc., violated a statutory duty to provide electricity.

Hurricane Wilma and the problems that came after was the story the media wasn't interested in.
That's too bad for them because there were a lot of stories there if they wanted to go looking. There were human interest stories and there were tales of alleged graft and dereliction.

I feel sympathy for the victims of Katrina and Rita (and don't consider myself a victim of Wilma) and agree that it's news but as one story after another repeatedly came on the radio in my grandfather's neighborhood, you'd hear a lot of anger that Florida was being ignored.

Was it about chasing down a story or was it about going after what made Anderson Cooper and others stars?

Did we run out of sympathy?

All the hurricanes hitting at once try our collective patience?

What ingredient was missing in Florida?

Not a high death toll didn't make us "sexy"?

I always thought the news was supposed to be about what was happening. I know that's not what we usually get. But a bunch of Floridians, many elderly, losing their homes, without power,
coming together to help one another out, seems to me like there's about fifty stories there.

The national media seems ill equipped to cover more than three stories at a time. Makes you wonder what else goes on in our nation that we don't hear about. Not just in D.C. but all over.

The national media filed on New Orleans and apparently that was their hurricane story.

The people of New Orleans are still being screwed over. It's a story worth covering. It's too bad that when it comes to the people of the United States, we're only worth one story. But hey, Harvard's offering extension classes! And colic might be curable by tea, massage or everything!
And "For One Student, A College Career Becomes a Career"! So how could Florida ever hope to compete with those important, must know stories?

the common ills
the daily jot
florida
Posted by Wally at 2:00 PM 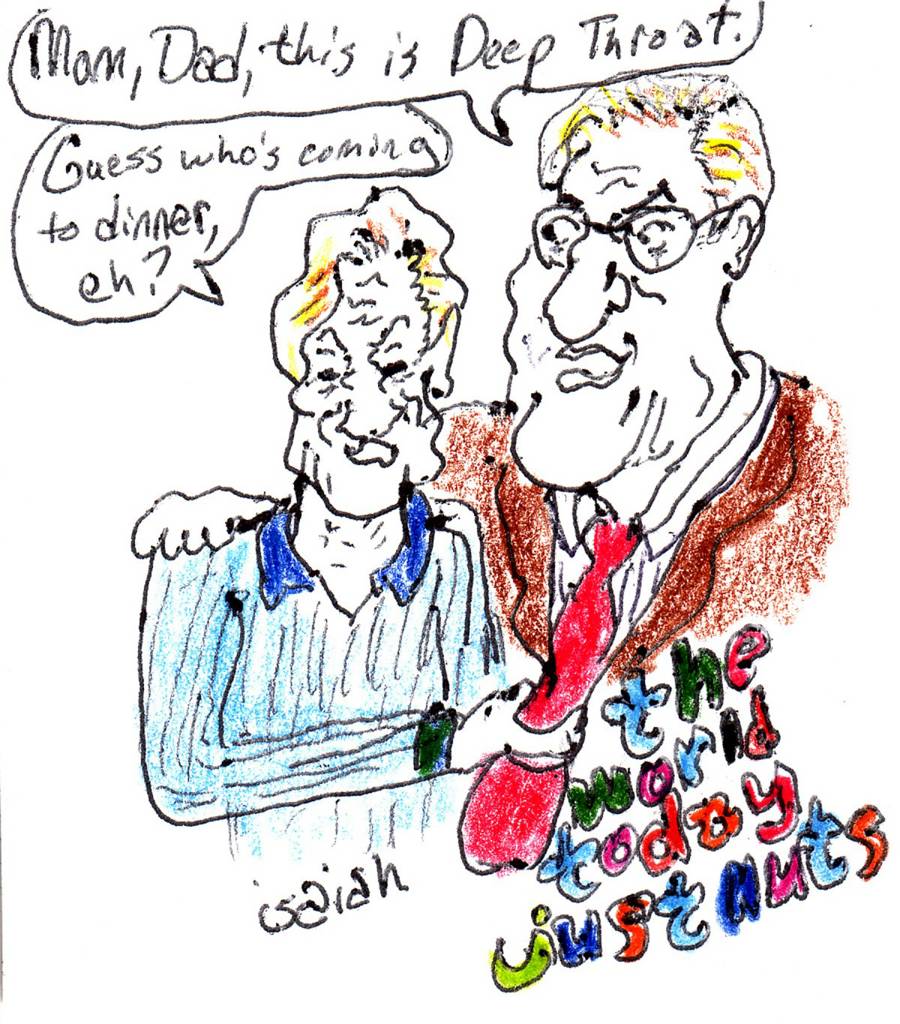 Woody's back in the news and Patrick Fitzgerald's got him!

Seems the Wood Man was tipped off about Valerie Plame in June of 2003.

All this time, Woody's played the silent game. Played it really well.

The source who told Woody about Valerie Plame went to Fitzgerald and told him.

If he hadn't, no one might ever know that Woody was a part of this story.

Of course, keeping silent to protect his source, didn't stop the Woodster from offering opinions about Plamegate in interviews. He handed out opinions like they were candy on Halloween night.

But no one hearing him knew then that he was a part of the story he was 'objectively' opining about.

C.I.'s got an editorial about it: "Editorial: Someone explain to Bob Woodward that a reporter reports."

I'm using Isaiah's The World Today Just Nuts from June 5th to note Woody's latest "I am the story!"


the common ills
the daily jot
the world today just nuts
Posted by Wally at 7:29 AM 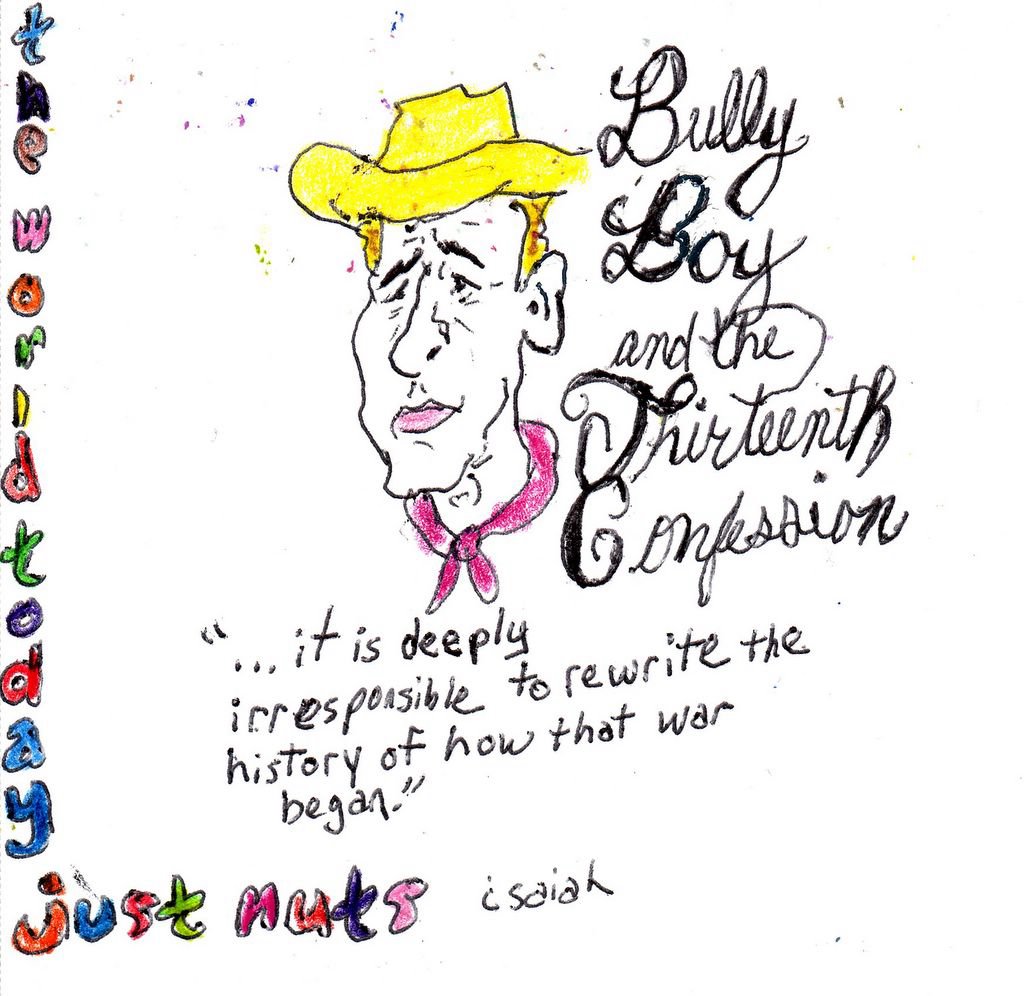 Years from now, he'll be like the converse George Washington. Parents will tell about him chopping down a cherry tree and how when asked, even though he was holding the axe at the time, he said, "No, no, it wasn't me!" When he was shown photos a neighbor took of him chopping down the tree, little Bully Boy would whine, "We all wanted to chop down the cherry tree!"

Moral of the story parents will point out to children, "You are responsible for your own actions. Not 'everyone else.' Not Bill Clinton. You."

At The Third Estate Sunday Review, I worked with them on this piece about the lies of Bully Boy. Check it out.

the common ills
the third estate sunday review
the daily jot
the world today just nuts
Posted by Wally at 7:25 AM