THIS JUST IN! THE OLD DRUNK IN A STUPOR!

THE OLD DRUNK WAS ON A DIFFERENT BENDER IN 2008.

HE'S BEING CALLED OUT FOR HIS LATEST PUBLIC INTOXICATION.

BUT OLD MAN HAYDEN REMAINS UNMOVED AS HE INSISTS, "AS LONG AS SOMEONE WILL CHANGE MY ADULT DIAPERS, I'M GOOD TO GO."

Today the US Defense Dept announced:

Attack, fighter and ground attack aircraft conducted seven strikes in Iraq, coordinated with and in support of Iraq’s government:

-- Near Huwayjah, a strike struck an ISIL tactical unit and destroyed an ISIL assembly area.

-- Near Qayyarah, a strike destroyed an ISIL vehicle bomb.

Task force officials define a strike as one or more kinetic events that occur in roughly the same geographic location to produce a single, sometimes cumulative, effect. Therefore, officials explained, a single aircraft delivering a single weapon against a lone ISIL vehicle is one strike, but so is multiple aircraft delivering dozens of weapons against buildings, vehicles and weapon systems in a compound, for example, having the cumulative effect of making those targets harder or impossible for ISIL to use. Accordingly, officials said, they do not report the number or type of aircraft employed in a strike, the number of munitions dropped in each strike, or the number of individual munition impact points against a target.

These bombings have been carried out daily since August of 2014.

And how has this addressed the problem of the Islamic State?


The editorial board of THE PITTSBURGH POST-GAZETTE reminds:


The Iraqi government of Prime Minister Haider al-Abadi has its own problems, considered largely to be a result of the actions of its Shiite Muslim leadership in monopolizing authority in Baghdad, excluding the 35-percent Sunni Muslims who ruled the country from 1932 to the U.S. invasion in 2003. That piece of unwise religious discrimination is bad enough in itself, but it is joined by serious pushing and shoving among the Shiites themselves.

The refusal to address the persecution of the Sunnis, the refusal to bring the Sunnis into the government fully is what resulted in the rise of the Islamic State.

"Honduras haunts Hillary"
"She is not one of us"
"Blood thirsty Hillary's Honduran rampage"
"Brave Cher"
"Will the FBI save America?"
"THE GOOD WIFE done wrong"
"Why De Blasio's apology won't suffice"
"hillary's latest non-excuse"
"THIS JUST IN! SHE SURVIVED THE 90S GANG WARS!"
"Cranky responds to criticism"

THIS JUST IN! SHE SURVIVED THE 90S GANG WARS!

CRANKY CLINTON CONTINUES TO REFUSE TO OFFER AN APOLOGY FOR HER RACIST "CPT" JOKE.

"GIVE ME A BREAK!" SNARLED CRANKY TO THESE REPORTERS.  "IF ALL THOSE PEOPLE HAVE TO WORRY ABOUT IS HOW A JOKE FROM ME COULD HARM THEM, THEY HAVE PRETTY GOOD LIVES.  MAYBE THEY SHOULD FOCUS ON STOPPING THEIR KIDS FROM JOINING GANGS AND DOING SMACK?  MAYBE THEY SHOULD STOP THE LITTLE PREDATORS THEY RAISE FROM DOING DRIVE BYS?  MAYBE THEN BIGGIE SMALLS AND DEEPAK CHOPRA WOULD STILL BE ALIVE AND RAPPING!"

CRANKY STORMED OFF BEFORE THESE REPORTERS COULD ASK IF SHE MEANT TU-PAC.

Barack continues the war on Iraq.

It was the second time a U.S. service member had been killed in Iraq since President Barack Obama resumed military operations there nearly two years ago.In the days after Cardin's death, U.S. military officials were forced to disclose why he and the Marines were at the base, how Marines would be used in the future and how many U.S. troops were actually in Iraq. The new information illustrated how the conflict had quietly expanded far from the public's view, and raised questions about Obama's pledge to keep U.S. troops out of combat there.
"Just because the commander in chief says there won't be combat doesn't mean that will be the case," Cardin's brother, Vincent, a former Army infantryman, said in a telephone interview. "It doesn't take much for someone to launch a rocket and start a fight when you're in someone else's country. If that's not combat, I don't know what is."
From the beginning, Cardin's mission in Iraq was secret.

Are Marines combat troops?
In Barack Obama’s world, the answer is apparently not—not even when they are on the ground exchanging fire with the enemy. This is the fiction supported by Hillary Clinton and largely unchallenged by any of the three Republican candidates for president.
A recent headline in the Marine Corps Times summed it up this way: “Marines in Iraq technically not in combat but still getting some.”

The Vice President spoke separately today with the Prime Minister of Iraq, Haider Al-Abadi, and the President of the Iraqi Kurdistan Region, Masoud Barzani, to reaffirm U.S. support for Iraq and the Iraqi people's ongoing fight against ISIL. The Vice President conveyed continued U.S. support for a unified, federal, and democratic Iraq, and encouraged close cooperation between the Government of Iraq and the Kurdistan Regional Government as they take steps to strengthen political unity and economic stability. The leaders underscored the urgency of sustained progress in the fight against ISIL and cooperation to liberate Mosul. The Vice President noted ongoing U.S. efforts to mobilize assistance for Iraq's economic recovery. The leaders also reaffirmed their commitment to the strategic partnership between the United States and Iraq.

Whenever Iraqis want to decide their own fate, there's the White House rushing in to say "no."

Heaven forbid Iraqis ever determine their own fate.

Iraq’s parliament is unlikely to vote on a new Cabinet lineup proposed by Prime Minister Haider al-Abadi in an attempt to curb corruption after lawmakers said Monday the dominant political blocs would name their own ministerial candidates.
Abadi last month presented parliament with a list of 14 names, many of them academics, to free the ministries from the grip of a political class he has accused of using a system of ethnic and sectarian quotas instituted after the U.S.-led invasion in 2003 to amass wealth and influence.

REUTERS reports that . . . but leaves out that this was a US-backed plan and that it went around Iraq's Constitution.

Also, are we supposed to be surprised by the reaction of Iraqi politicians?

Maybe if we were counting on REUTERS which only just discovered the objection.

But the April 2nd snapshot noted:

AL MADA notes that the proposed Cabinet was greeted earlier this week by a statement from KRG president Massoud Barzani who declared Haider's proposal had no importance and that it was long ago cleared there was no true partnership in the current government.
What's really amazing is how little objections to Haider's proposed Cabinet is covered by the international press.
There was an election in Iraq today.  Ammar al-Hakim was re-elected as the leader of the (Shi'ite) political body the Islamic Supreme Council of Iraq.  And ISCI issued a statement that any political reforms (the Cabinet) should not weaken the law or increase political differences.
ALL IRAQ NEWS notes Ammar issued a statement as well when he noted reform did not equal proposing a new Cabinet.
Ammar held a press conference today where he expressed surprise by Haider al-Abadi's proposal to reform the Cabinet.  This as NATIONAL IRAQI NEWS AGENCY reports that there is strong division in Parliament over Haider's proposed Cabinet with some likening Haider's proposals to the start of a "dictatorship."
Meanwhile AL MADA notes that the Kurds continue to demand 20% of the positions on any new Cabinet while Haider's nominees are facing criticism from Sunni political blocs.
But it's the Shi'ite criticism that's emerging and the most vocal.  IRAQ TIMES notes State of Law MP Kazem al-Sayadi has declared that, no way, no how, will any former member of the Ba'ath Party sit in the Cabinet.
In addition, ALSUMARIA reports that the Coalition of National Forces are also voicing objection to Haider's proposal with MP Khaled Mafraji declaring that what Haider has done is both incorrect and illegal.
As if Haider's proposal didn't have enough problems to face, it's already minus one.
NATIONAL IRAQI NEWS AGENCY reports Nazar Muahmmad Salim al-Numan withdrew his name from consideration on Friday.  Haider had nominated him on Thursday to be the Minister of Oil.  He stated he was withdrawing his name due to a "lack of political consensus."
IRAQ TIMES notes additional criticism of Haider's proposal -- MP Ghaida Kmbh has come out against Haider's proposal to eliminate some ministries and combine others.
This was supposed to be an easy move.
But someone in the US government forgot that there are no easy moves in Iraq.


So today's 'news'?  Only a surprise if you weren't paying attention.

RECOMMENDED: "Iraq snapshot"
"The continued failures in Iraq"
"Hejira"
"Kat's Korner: Graham Nash Breaks Your Heart Again"
"Iraq and more"
"Graham Nash has a new album coming out"
"You are (still) watching MADTV"
"Hillary just suggested Barack's run the country on CPT?"
"hillary steps in it again"
"Hillary owes the country an apology"
"Again with the racism, Hillary?"
"You have to wonder"
"Graham Nash"
"Jerry White tells the uncomfortable truth"
"THIS JUST IN! HILLARY DICE CLINTON!!!!"
"She's got jokes"

THIS JUST IN! HILLARY DICE CLINTON!!!!

CRANKY CLINTON IS NOT A RACIST.

AND SHE'S GOT A RACIST JOKE FOR YOU IF YOU NEED HER TO PROVE IT.

"COLORED PEOPLE TIME" IS APPARENTLY WHAT SHE'LL BE USING THIS DECADE INSTEAD OF "SUPER PREDATOR" TO INSULT AFRICAN-AMERICANS.

. . . IF YOU IGNORE EVERYTHING SHE SAYS AND DOES. 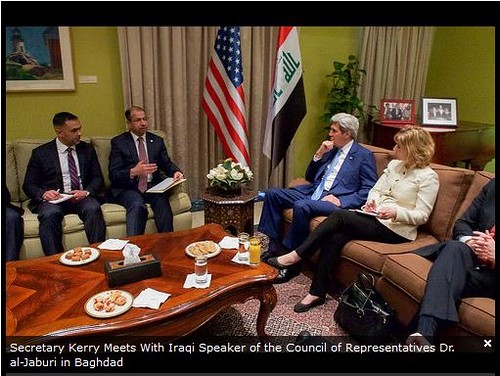 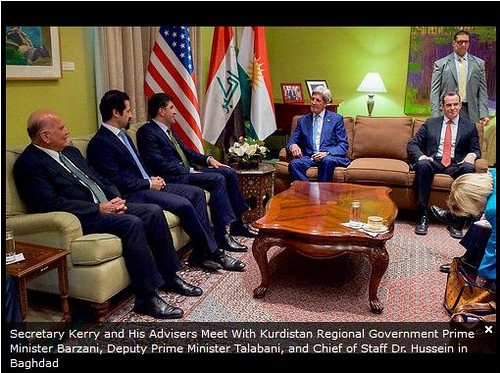 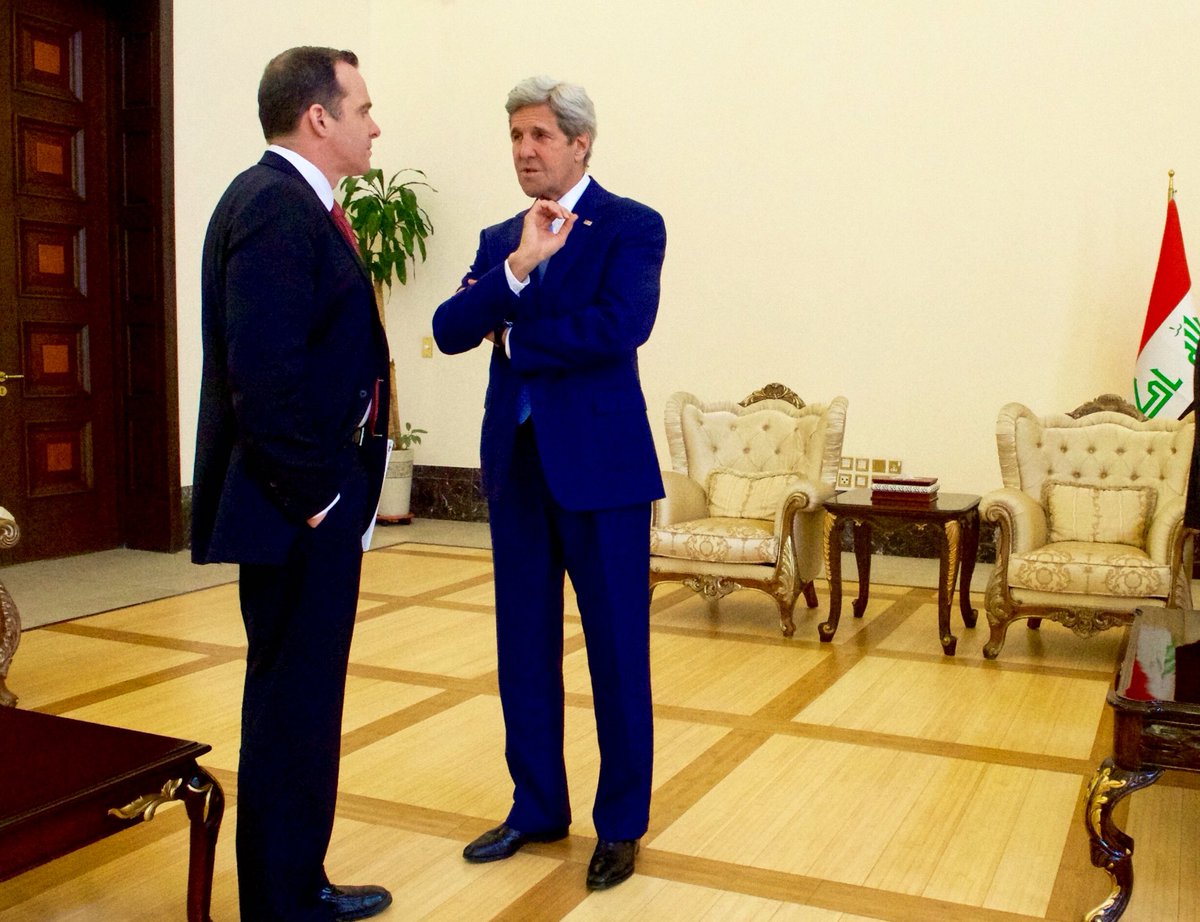 It was with ISIL in mind that Kerry made his unannounced stop in Baghdad. Iraqi government forces, with U.S. backing, are poised to retake Mosul, Iraq’s second largest city. Kerry had a message of encouragement.

[. . .]
Kerry’s visit comes at a time of continued division among Iraq’s politicians and ethnic groups. Sunnis are still not convinced that a Shiite dominated government in Baghdad is a better alternative than ISIL.


And Kerry does nothing to address this  or to call for Haider al-Abadi to address it.

Haider is the prime minister now because Barack and the Iranian government could agree on installing him.

The Iraqi people are not the ones picking their prime minister.  They have no say.


Haider is doing what the US government wants, not what the Iraqi people want.

The lack of support from the Iraqi people is why so many Iraqi politicians can -- and have -- speak out agains the proposals.

Well, why not address that crisis?


In fact, when will that crisis be addressed.