THIS JUST IN! IT'S OVER (TELL SIDNEY POWELL)!

THE ELECTORAL COLLEGE COMPLETED ITS VOTE AND JOE BIDEN WON WITH 306 VOTES TO DONALD TRUMP'S 232.  FOLLOWING THE VOTE, DONALD REFUSED TO CONCEED THE PRESIDENCY INSISTING THAT OTHER OPTIONS WERE STILL AVAILABLE SUCH AS CHOOSING STRAWS AND ROCK-PAPER-SCISSORS.  MEANWHILE HIS ATTORNEY SIDNEY POWELL DEMANDED A HAND RECOUNT AND INSISTED THAT VENEZUELAN SOCIALIST POSED AS IOWAN ELECTORS TO ALTER THE VOTE.

NEXT UP, THE SPANKING OF BAD BOY HUNTER BIDEN -- DID HE GET A CHUBBY DURING? 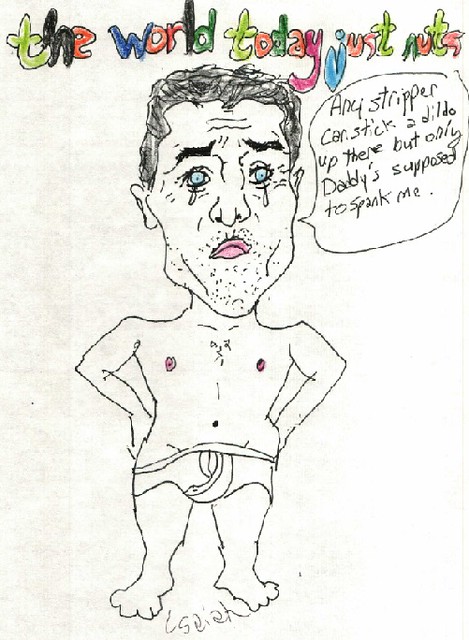 But the disclosure of a criminal inquiry into his son thrust Mr. Biden into a charged position as he prepares to take office. Republican senators called for an independent special counsel to investigate Hunter Biden, and Mr. Trump complained that the Delaware inquiry did not surface before the election.

Why not?  He bedded his brother's widow.  He had to be hauled into court to pay child support for a child he denied -- denied even after the test concluded he was the father.  He spent millions on drugs and hookers according to his first wife -- that would be the mother of his children (plural) whom he left to bed his brother's widow.  "Hey, kids, say hi to Aunt-Mommy!"  And we didn't even get into his drug addiction.  An African-American with the same drug problems would be in prison -- as a result of the laws Joe championed as a US senator.  But Hunter gets a pass over and over.  He needs something to make his sad resume look impressive?  Daddy Joe -- then the Vice President -- cuts all red tape and gets him instantly in the reserves.  But f**k up Hunter can't even last a month before he fails a drug test and is kicked out.

Brian Stelter has long been part of the problem.  When will CNN hire a woman as ugly as Brian?  Never.  It's a visual medium so why did they hire Brian to begin with?  He spent his Sunday show spouting more nonsense.  He thinks attacking FOX NEWS makes him a critic.  No, Brian, a real critic can turn the eye on their own network and, in the case of Hunter Biden, absolutely should.  Mark Hemingway (REAL CLEAR POLITICS) notes:

Hunter Biden announced Wednesday he is under federal investigation for his financial dealings in foreign countries, including China. While the news sent shockwaves through Washington, D.C., it shouldn’t have been surprising. The announcement confirms many of the allegations of corruption that were leveled against Hunter Biden in the months leading up to the November elections – allegations the media steadfastly refused to cover.

The nation’s largest social media companies went further: They made the shocking decision to actively censor the New York Post’s eye-opening scoop revealing evidence of Joe Biden’s son’s influence peddling that was recovered from an abandoned laptop. Twitter locked the newspaper out of its own account for weeks. Facebook prevented the Post’s story from being widely distributed, even though neither Joe Biden nor his campaign disputed the authenticity of the documents published by the paper.

In retrospect, not only do the documents appear to be authentic, but a Daily Beast report Thursday notes evidence that the Hunter Biden investigation was hiding in plain sight. One of the FBI documents from the laptop published by the Post “included a case number that had the code associated with an ongoing federal money laundering investigation in Delaware, according to several law enforcement officials who reviewed the document. Another document — one with a grand jury subpoena number — appeared to show the initials of two assistant U.S. attorneys linked to the Wilmington, Delaware, office.” Hunter Biden claims he only learned of the  investigation this past week, but these documents suggest otherwise.

Even a cursory inquiry by the New York Post’s competitors would have confirmed that Biden was under federal investigation. One journalist did behave like a reporter. In late October, Sinclair Broadcast Group correspondent James Rosen reported that Hunter Biden was under active investigation and a Justice Department official confirmed his scoop. Almost without exception, America’s press corps refused to follow up on Rosen’s revelation — or even report it.

The corporate media has a great deal to answer for.  Trash like Erica Jong's daughter work overtime to enure that no answers ever come.  Ross Barkan (JACOBIN) writes:

In 2017, MSNBC, unable to marshal much of an audience during Obama’s presidency, became a place where every Trumpian outrage and conspiracy could be parroted and expanded to maximalist proportions. Ratings soared. Rachel Maddow became one of the biggest stars in television, rivaling the reach of any Fox host. CNN, too, made a fortune on liberal angst and rage, branding for the Resistance.

For mainstream liberal outlets — both those that openly identify that way, and those that keep up the pretense of neutrality — the future is less clear. For four years, the top media organizations in America universally benefited from Trump. The New York Times and the Washington Post, which received a remarkable surge of subscriptions from beleaguered readers, almost all Democrats who turned to them for news of Trump’s potential downfall, also rebranded for the Resistance. From Russiagate to impeachment to Trump’s unhinged tweets, content was never lacking — the show always went on. The Post even devised a new grandiose motto, “Democracy Dies in Darkness.” Smaller liberal outlets like the New Yorker, New York magazine, Vox, and the Daily Beast trod a similar path.

Many media organizations played a role as an aggressive and necessary watchdog in the Trump years. The bankrupt access-journalism model, in which reporters allow themselves to be co-opted by powerful actors for mostly meaningless scoops, lost favor in the Trump years, as more journalists and readers recognized that it could not function with a White House that offered so little in the way of reliable information. Trump did revive gossip-infused palace intrigue reporting, with so many staffers cycling in and out, but that did not cause mainstream outlets to abandon their adversarial stance, at least toward Trump himself. The Mark Halperin model of reporting was rightfully discredited.

But a new problem arises now: Can these many media organizations, so closely linked to the project of anti-Trump resistance, leave behind their role as Democratic Party activists and Biden apologists? As Branko Marcetic wrote in Jacobin in October, the collective decision to entirely suppress the New York Post’s dubious, though hardly fabricated, reporting on Hunter Biden’s business dealings in Ukraine and cheer on the censorship efforts of Facebook and Twitter — the latter social media giant, in an unprecedented move, locked the Post’s main account and temporarily blocked sharing of the story — could be a harbinger of what’s to come. The Post’s story should not have been promoted uncritically, but most media outlets failed in their first duty to the public: to report and find out what’s true and what’s false. Instead of attempting to verify the facts of the story and then deciding whether to dismiss all of it as bunk, media organizations blacked out the story without making even a perfunctory attempt to explain what it was that had been revealed in the first place and if any of it could be relevant to the public.

Still traumatized by 2016, when Democratic Party operatives attributed Trump’s victory to Wikileaks’ release of hacked emails from the Hillary Clinton campaign and the Democratic National Committee, media organizations were determined not to be perceived as aiding and abetting a candidate they regarded as a threat to democracy itself. Once Trump was deemed a fascist — never mind that Trump was a historically weak president who accomplished relatively little beyond judicial appointments, as Corey Robin has convincingly argued — any and all reporting that could be perceived as damaging to his rivals was viewed by the Democratic readership as the greatest of transgressions.

But as long as Trump was president, at least none of this hindered the practice of accountability journalism vis-à-vis the executive branch.

What now? There is a real danger of slipping into a new normal, in which liberal-leaning newspapers and websites fail to report as aggressively on the Biden White House as they did on its predecessors. Aaron Rupar, a prominent Vox editor, recently dismissed an investigative report into the lucrative private-sector careers of Biden’s wealthy foreign policy team. “Blinken participated in society. The horror,” Rupar tweeted, referring to Biden’s pick for secretary of state, Antony Blinken.

Apparently, to some journalists, founding a high-dollar consulting firm with clients in the defense industry, Silicon Valley, and various hedge funds while also being a partner in a private equity firm can now be equated to the mere act of “participating in society,” as if this were an unavoidable part of everyday life. Had a Trump cabinet pick boasted a similar background, it’s unlikely Rupar would have been so blasé. The danger is that in the post-Trump era, Democratic corruption will be seen as acceptable because it’s not Republican corruption.

"Isaiah's THE WORLD TODAY JUST NUTS "Dianne Does He..."

"AOC Refuses To Oppose Pelosi To Get Medicare For A..."

"Joe Biden's Accuser In Her Own Words"

"A Feminist Vision for Sexual and Reproductive Heal..."

"The Active Suppression of Female Voices/Feminism a..."

"I agree with the Chairman of the Joint Chiefs of S..."

"Sneak Peek! The Second Weekend of the 2020 Conference"

"Bernie Sanders: From Opposing the Deep State to Be..."

"Tulsi Gabbard: The Only Democrat in Congress With ..."

"Krystal and Saagar: RENTPOCALYPSE Is Here And It's..."

"Krystal Ball: How DOOMED Is MSNBC In The Biden Era?"

"Have a Blessed Pearl Harbor Day"

"GTAA Livestream: The Class War at Walmart (with Li..."

"#TheJimmyDoreShow Hillary Supporter is Delirious A..."

""Don't you wish we had a functioning Congress?""

"John Barbour on the JFK assassination"

"Favorite Prince song that was never a single?"

"Cher should record this song"

"Pot Roast in the Kitchen"

"No, we aren't in this together"

"The joke that is Biden"

"All alone in the midst of a global emergency"

"We are being screwed"

"look for a roundtable"

"THIS JUST IN! KAMALA HARRIS BUILDING THE #ME TOO MOVEMENT ONE VICTIM AT A TIME!"