THIS JUST IN! SHE WILL KEEP ON LYING!

IN THE FACE OF AN INSPECTOR GENERAL REPORT THAT REVEALS HER TO BE A BOLD FACE AND SERIAL LIAR, CRANKY CLINTON HAS DECIDED TO DOUBLE DOWN.

"KEEP LYING!" SHE REVEALED TO THESE REPORTERS THIS MORNING.  "IT'S A REPORT, FOR GOD'S SAKE.  WHO READS ANYMORE?  I'LL JUST LIE AND SAY THAT THE REPORT BACKS UP EVERYTHING I'VE ALREADY SAID AND MOST PEOPLE WILL BELIEVE ME.  BECAUSE, AFTER ALL, I AM CRANKY CLINTON."

At a time when the only answer or 'answer' some can see in Iraq is weapons and more weapons, a surprising twist emerges.

As calls for the US government to arm every group in Iraq, Sameul Smith (CHRISTIAN POST) reports Father Louis Sako, the patriarch of the Chaldean Church in Iraq, is stating do not send arms to what have been termed "Christian militias."  The priest explains, "There are no 'Christian militias,' but only politicized groups and simple people who are in desperate need of a salary.  The remaining Christians in Iraq are only the poor and those belonging to the middle class, and among them, there are 100,000 displaced people."  Instead, the priest states,  any arms should go to the Kurdish military to protect Christians in Nineveh Province.

But for Iraq otherwise, it's weapons and more weapons, always weapons, that are the 'answer.'

Today, the US State Dept did their third press briefing of the week.

And, in a sign of how the US government and the press are forever entwined in a whorish embrace, for the third day in a row, not one reporter present had a single question about Iraq.
Sunday, the assault on Falluja began.

And yet not one reporter covering the State Dept asked a question about Iraq on Monday.

It's a sign of the failure of the White House and the State Dept -- the continued failure -- that they refuse to pursue political options in Iraq.

THIS JUST IN! CRANKY BROKE THE RULES!

CRANKY CLINTON STEPPED IN IT AGAIN!

THE STATE DEPT.'S INSPECTOR GENERAL REPORT FINDS THAT SHE BROKE THE RULES WITH HER PRIVATE E-MAIL SERVER AND FAILED TO PRESERVE E-MAILS IN KEEPING WITH THE FEDERAL RECORDS ACT.

REACHED FOR COMMENT, CRANKY GROWLED AT THESE REPORTERS, "RULES AREN'T MADE FOR PEOPLE LIKE ME! RULES DON'T APPLY! NOW MOVE ALONG, BOYS, OR ME AND SIDNEY BLUMENTHAL WILL THINK UP LIES TO SPREAD THROUGH THE PRESS ABOUT YOU!"

Donatella Rovera ‏@DRovera  14h14 hours ago
As #Iraq forces close in on #Fallujah , thousands of families trapped with no safe route out http://www.nrc.no/?did=9218642#.V0R8RvkrLIX … 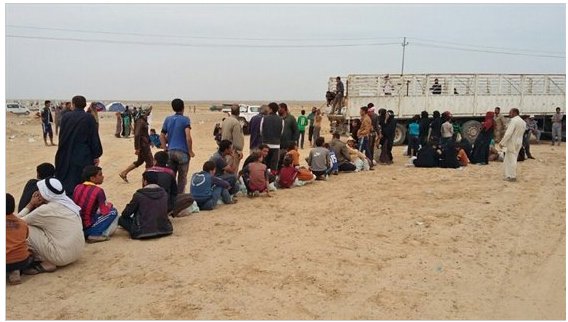 Falluja is not empty space.  It is a big city in Iraq.


Over 300,000 people lived there and news outlets estimate that 100,000 civilians remain in the city today as Iraqi forces head towards the city.

As the assault on Falluja continues, Nancy A. Youssef (DAILY BEAST) explains:
According to U.S. estimates there are as many Iraqi Security Forces as Shiite militia forces around Fallujah or 20,000 in all. In Garma and elsewhere on the periphery of Fallujah, evidence has emerged showing Iranian Revolutionary Guards Corps-backed Shia militia groups participating in the advance against ISIS. These militias include groups previously responsible for killing U.S. soldiers in Iraq—such as the League of the Righteous—and those expressly blacklisted by Washington as foreign terrorist entities, such as the Hezbollah Brigades. Another group spotted in battle is Harakat Hezbollah al-Nujaba, whose secretary general Akram Ka’abi also sanctioned by the US Treasury Department as a terrorist. The Facebook page for that organization recently posted a photograph purporting to show Qassem Soleimani, the commander of the IRGC’s Quds Force, in the “Fallujah operations rooms” along with Abu Mahdi al Muhandis, the leader of the Hezbollah Brigades (and another US-designated terrorist) and Hadi al-Amiri, the head of the Badr Organization, which is another Iranian-backed militia, which yesterday announced its first casualty in the battle.
Phillip Smyth, a specialist on Shia militias at the University of Maryland, told The Daily Beast that these groups have “been using a lot of indirect artillery and rocket fire” against ISIS positions. “You have a new propaganda image from all of circulating on social media every day.” Moreover, the militias have been advancing on Fallujah, Smyth says, since since the summer of 2015. “We’re saying it’s an [Iraqi Security Force] operation when the main forces on the ground for months are the Iranian-backed fighters.”


Terrorists?  The US government can always cozy up to them.

They're never so lucky.


In all the reports filed on Falluja, civilians are either invisible or a footnote.  One exception is a report by Al Jazeera which puts the focus on the civilians:

Speaking to Al Jazeera from Baghdad, the Norwegian Refugee Council's Becky Bakr Abdulla recalled stories told to her by families who managed to escape Fallujah, where the Iraqi army has shelled areas controlled by the Islamic State of Iraq and the Levant (ISIL, or ISIS) group since Monday.
"People basically are surviving on dried dates and water from the river," Abdulla said. "The only things these families managed to take with them were the clothes they're wearing and their IDs."
Abdulla explained that the few families who did escape the town in Anbar province had to traverse around 30km by foot and pass numerous checkpoints in order to reach safety.
Although the offensive was launched on Monday, Iraqi government forces have besieged the city and its suburbs for several months now, resulting in shortages of food and medicines.

At least 15 civilians have been killed so far during the offensive, sources told Al Jazeera.


When the bulk of the other 'reports' on Falluja today briefly note civilians, it's usually to note that the United Nations and/or the International Committee of the Red Cross is calling for civilians lives to be protected.

That's generally a single sentence in those 'reports.'


There's no effort to quote from either call.

All sides must do their utmost to protect and spare the civilians of Fallujah.

Baghdad (ICRC) - Fierce fighting is underway around the Iraqi city of Fallujah, raising serious concerns about the well-being and safety of civilians still trapped in and around the city. The situation is particularly worrisome for the tens of thousands of men, women, children and elderly who remain stuck inside the town – the largest in Anbar province – who have already had very limited access to food, water and basic healthcare for the past two years.
"Fallujah must not be allowed to become another Ramadi," said the ICRC's head of delegation in Iraq Katharina Ritz, referring to a nearby town that was severely damaged and left scattered with explosive remnants of war after intensive fighting there earlier this year. Clearing Ramadi of explosive weapons and rebuilding its homes and disrupted water and electric systems could take months, if not years to complete.
"Civilians must be spared and allowed to leave Fallujah safely, while houses and other civilian infrastructure must not be targeted", Ritz continued. "People of Fallujah have already suffered enormously as a result of relentless fighting in the area. Humanitarian agencies must be given access to reach them and provide relief."
The ICRC has been seeking access to Fallujah for months, but has so far not been able to get the safety guarantees and commitment it needs by all parties. It stands ready to provide humanitarian assistance to communities affected by the violence.
For more information, please contact:
Ralph El Hage, ICRC Baghdad +964 7901 916 927
Krista Armstrong, ICRC Geneva +41 79 447 37 26

"THIS JUST IN! WHAT THE FRACK!"
"Clinton embraces her inner conflicts"

THIS JUST IN! WHAT THE FRACK!


SHE WAS FOR IT BEFORE SHE WAS AGAINST IT.

CRANKY CLINTON RECENTLY AIRED COMMERCIALS NOTING HER OPPOSITION TO FRACKING; HOWEVER, AS SECRETARY OF STATE SHE PROMOTED IT TO FOREIGN COUNTRIES.

REACHED FOR COMMENT, CRANKY DENIED THIS WAS A PROBLEM OR CONFLICT.

"I AM OPPOSED TO FRACKING IN NEW YORK AND HERE IN THE UNITED STATES.  I THINK IT IS HIGHLY DESTRUCTIVE.  BUT WHO CARES ABOUT CHINA?  IF MY RECORD SHOWS NOTHING ELSE, IT SHOWS THAT I HAVE NO PROBLEM DESTROYING OTHER COUNTRIES -- LOOK AT IRAQ AND LIBYA FOR STARTERS.

Moqtada al-Sadr remaining in Tehran stands a big chance of being harmed.

The leader whose followers are slain?

While he's safe and out of the country?

And denying that he ordered the action?

Haider doesn't win from the incident either.

He's inept and that's only more obvious with Friday's actions.

Which will bother some Iraqis -- even those who favor 'rule of law.'

But the reality is that Haider was yet again unable to protect the Green Zone or, in this case, even his own office.

And Barack can try to prop him up all he wants but (a) people died and (b) the Green Zone was breached again.

Those two events speak for themselves -- and speak loudly against Haider.

NINA notes Haider issued a statement declaring that the storming of the Green Zone on Friday (and of his office) must not happen again. He dubbed it a distraction from the fight against the Islamic State.  AL MADA adds that the statement was aired on state TV in the early morning hours.


While Barack had no interest in raising the topic, Mu Xuequan (XINHUA) reports:

The UN envoy to Iraq on Saturday expressed deep concern about Friday's demonstrations when hundreds of followers of Shiite cleric Moqtada al-Sadr broke into the heavily fortified Green Zone, calling for calm and unity to achieve reforms and confront the Islamic State (IS) group which seizes parts of Iraq's northern and western regions since 2014.
"What happened on Friday shows how events could take a different turn and escalate, causing casualties," UN envoy to Iraq Jan Kubis said in a statement.


ALSUMARIA reports that Haider and Barack discussed the upcoming 'liberation' of Falluja.  In fact, that topic is in the statement released by the Prime Minister's office summarizing the phone call.

Strange that it failed to make the statement released by the White House.


Or strange until you realize that the White House is pushing for Mosul to be the next focus.

This DoD article from Friday makes that clear:

The military campaign to defeat the Islamic State of Iraq and the Levant is at an important juncture, with a new focus and steady progress by the U.S.-led coalition and Iraqi and Syrian security forces partners, Army Lt. Gen. Sean MacFarland said here today.
MacFarland, the commander of Combined Joint Task Force-Operation Inherent Resolve, spoke with reporters who are traveling with U.S. Central Command commander Army Gen. Joseph L. Votel, who is meeting this week with coalition troops and local counter-ISIL partners in the Middle East.
“We’re at an important part in the campaign right now,” MacFarland told reporters. “When I first got here about eight months ago it was all about Ramadi and taking Ramadi back,” he said.
“Well, we’ve taken Ramadi back,” MacFarland said, “and now, the focus of the campaign is shifting more toward taking back the enemy’s centers of gravity in Iraq and Syria -- Mosul and Raqqa. That’s what we’re about today.”

RECOMMENDED: "Iraq snapshot"
"Shaun Tweets"
"Jill Stein Tweets"
"Iraq snapshot"
"Vengeance is not justice"
"THE BLACKLIST finale (spoilers)"
"He Only Talks To Some"
"The loser"
"If it was about set value . . ."
"Madonna 'salutes' Prince?"
"Sexist geezer Steven Tyler"
"Does Nick Jonas have a skin rash?"
"The Go Gos"
"That embarrassing Celine Dion"
"Rihanna keeps disappointing"
"it ain't me babe, it's kesha"
"THIS JUST IN! DEBBIE RESPONDS!"
"Cleaning out the washer woman"