THIS JUST IN! CRANKY READY TO STEP IN IF NEEDED!

AFTER A DEDICATION CEREMONY IN D.C. YESTERDAY, A STILL EMBITTERED CRANKY CLINTON GRANTED AN INTERVIEW TO THESE REPORTERS TO EXPLAIN WHY SHE WAS PLANNING ON ATTENDING THE INAUGURATION OF DONALD TRUMP.

"AS I SAID WHEN PEOPLE WERE TELLING ME TO DROP OUT OF THE DEMOCRATIC PARTY RACE FOR PRESIDENT IN JUNE OF 2008, 'WE ALL REMEMBER THAT BOBBY KENNEDY WAS ASSASSINATED IN JUNE IN CALIFORNIA.' ANYTHING CAN HAPPEN.  AND I NEED MY COUNTRY AND MY CULT TO KNOW THAT -- SHOULD ANYTHING HAPPEN -- I WILL BE PRESENT AND WILLING AND READY TO STEP IN AT A MOMENT'S NOTICE."

ASKED IF SOME MIGHT CONSTRUE HER COMMENTS AS A THREAT, CRANKY CLINTON RESPONDED, "ME?  MAKE A THREAT?  REALLY?  ME?"


Let's stay with the industry first.

Meryl Streep is not a star and  never has been.

Most people will not pay to see Meryl which is why she can't open a film and why her films are flops.

She's made 66 films and her average domestic box office is $33 million.

That's ticket sales.  That is a joke.

She is a joke.

Not one of her last five films has even made $30 million at the box office.

She is not a star.

Try to imagine a reel of Meryl highlights?

Does anyone remember anything?

There's DEATH BECOMES HER -- but credit for that goes to Robert Zemeckis and Goldie Hawn.

DEATH BECOMES HER goes to Meryl's problems.  In the late 80s, she'd finally found a way to fill in her otherwise hollow characters (this happens when she moves into comedy) but in 1992's DEATH BECOMES HER -- and all that's followed, Meryl's projecting into her own palm.  She can't interact with other characters and it's as though she has no body.

But we're talking about a performer divorced from her body.

There are many finer actresses than Meryl.  Lily Tomlin immediately comes to mind.  Every scene is a work to marvel with Lily.  That's especially true when Lily co-starred with Meryl in Robert Altman's last film.  You watched Meryl do all the same things, same fussy business she does with each role, all the mechanics (as Pauline Kael long ago pointed out) and you never feel reality, you just feel like Meryl's doing yet another performance that her drama teacher will applaud.  Yawn.

Meryl may do accents but her characters are all the same.

Lily's Margo in THE LATE SHOW and Violet in 9 TO 5 and Linnea in NASHVILLE and Edweena in ALL OF ME and Doreen in SHORT CUTS and Elle in GRANDMA and Frankie in GRACE AND FRANKIE are all different and distinct characters.  They move differently, they gesture differently, Lily alters her body and her voice for each role.

Lily's co-star in GRACE AND FRANKIE is Jane Fonda.  Meryl has done 66 films.  Where is her Bree Daniels?

I always argue that Jane gave the best performance of any actress in the second half of the 20th century with KLUTE.

Lily's been nominated once for an Academy Award -- only once.

And don't complain about the actresses denied nominations -- worthy actresses -- unless you want to face the reality that Meryl doesn't deserve 19 nominations.

But she's received them.

Not because she's outstanding like Lily Tomlin or because she's given an amazing all out performance like Jane Fonda, but because of the class system -- an upper, middle class, eastern seaboard woman who went to Vassar and Yale.

Debra Winger is a better actress then Meryl but Debra's background's working class.  So the fussbudgets among the 'critics' don't rush to crown Debra.

It's a class issue.

And when Meryl won for her awful portrayal of Margaret Thatcher (in the fact challenged film), that meant Viola Davis lost for THE HELP.  Viola's performance had life, passion and believability.

So, yes, it is an issue that matters.

Because Meryl's a WASP, she doesn't have to excel, she merely has to be adequate.

And when she goes on TV and presents herself as 'the left' that's a lie that needs to be called out.  She is not opposed to war.  She is not concerned with illegal spying.  She is hack for the Democratic Party.

This kid says it all.
joey4track added, 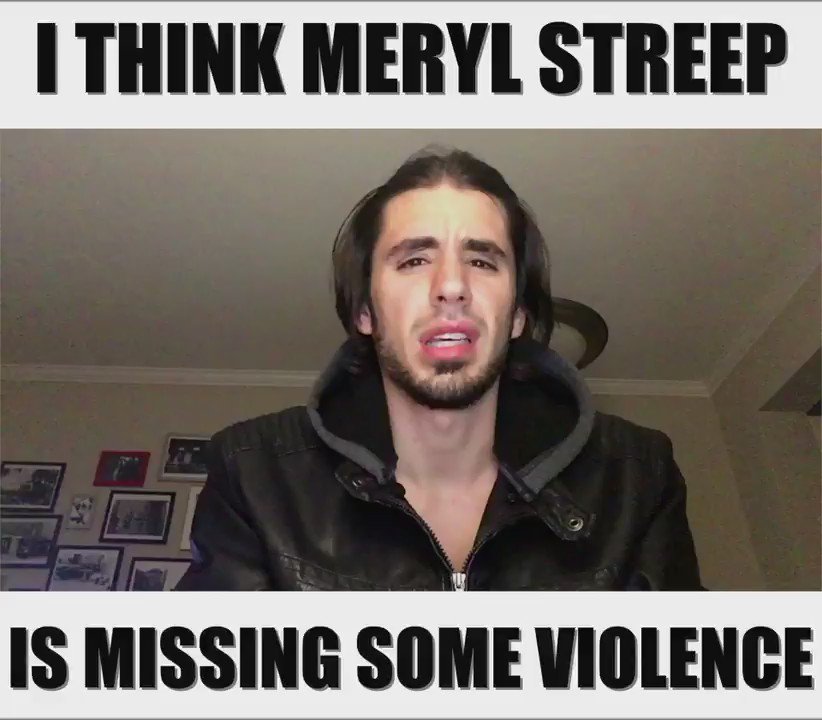 Meryl Streep wants to get political? I'm game. Why are they crowning her a hero? Her Golden Globe speech was missing this...

Meryl Streep blasted Trump at the Golden Globes. Where are her tears over Obama's policies? New Award: Best Selective Outrage by an Elite! 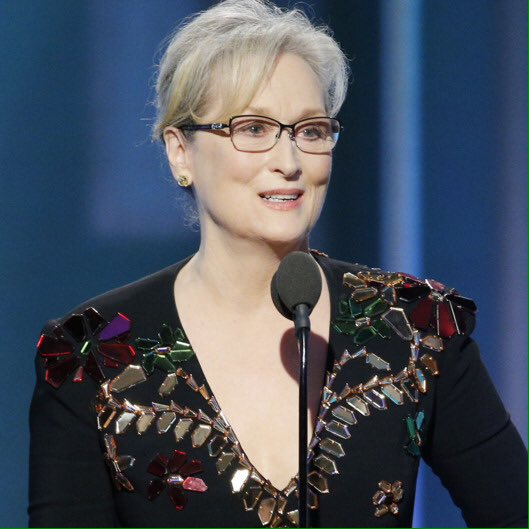 RECOMMENDED: "Obama's Legacy -- "...a Disaster..." (Francis A. B..."
"Iraq snapshot"
"Allegations Against Russia Less Credible Every Day..."
"Iraq snapshot"
"Iraq and that embarrassing Meryl Streep"
"The hideous David Brock"
"I find SPLIT offensive"
"Why doesn't THE MIDDLE get any respect?"
"Clearing out the gas bags"
"Russian salad dressing (before they pull it off the shelves)"
"Say it, say it again"
"No, Michael Tracey, it's not strange"
"remember those idiotic 'progressives for obama'?"
"Barack's river of broken promises"
"Norman Solomon on Russia lies and me on Norman"
"Ruth Conniff and THE PROGRESSIVE are trash"
"THE GOOD FIGHT?"
"2 articles you should read"
"Schooling Meryl Streep"
"Great Tweet"
"Where are the jobs?"
"oh, meryl, go back to your mansion"
"Meryl Streep is a danger to the world"
"WASP Meryl does not speak for this woman of color"
"Hypocrisy"
"Exclusive: KGB Agent exposed"
"THIS JUST IN! CLINTON A KGB AGENT! EXCLUSIVE REPORT!"