THIS JUST IN! BULLY BOY CORRECTS THE RECORD!

BULLY BOY PRESS & CEDRIC'S BIX MIX -- DC.
BULLY BOY WAS PISSED AND DRUNK WHEN HE INVITED THESE REPORTERS OVER TO SET THE RECORD STRAIGHT AND TO SAMPLE HIS WHITE PHOSPHORUS COCKTAILS.
AS HE MIXED THE DRINKS (INCLUDED AT THE END), HE EXPLAINED HOW THE WASHINGTON POST HAD MISQUOTED HIM.
"I NEVER SAY 'BLOODBATH'!" HE SLURRED.  "I ALWAYS SAY 'BLOODBOX.'  ALWAYS!"
AS HE CONTINUED INSISTING, HE SHOWED THESE REPORTERS A PHOTO OF HIMSELF AND FIRST LADY LAURA BUSH IN HAPPIER TIMES (SEE BELOW) WHILE HE PLAYED IN HIS BLOOD BOX. 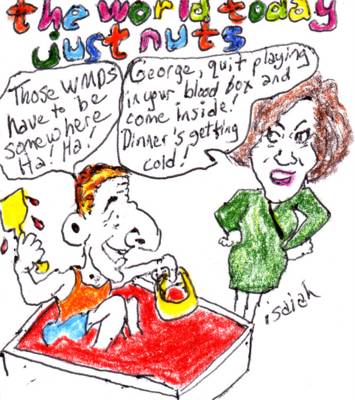 THIS JUST IN! STILL CRAZY!

THIS JUST IN! TRASH RISES AND TRIES TO PASS AS DEM!

BULLY BOY PRESS & CEDRIC'S BIX MIX -- DC.
ALL OF D.C. IS CONCERNED WITH THE BULLY BOY WHO HAS REVEALED HE IS "FRUSTRATED WITH CONGRESS."
INSIDERS SAY THEY FIRST REALIZED THERE WAS A PROBLEM ON FRIDAY WHEN PRESIDENT OF VICE DICK CHENEY KILLED A BIRD WITH HIS PLANE AND BULLY BOY HAD NO JOKES.  MORE RECENTLY, SECRETARY OF STATE AND ANGER CONDI RICE ATTEMPTED TO CHEER HIM UP BY PLACING A WHOOPI CUSHION UNDER ALBERTO GONZALES IN A PRE-SATURDAY MASSACRE RUN THROUGH MEETING.
"NOTHING," RICE REPORTS.  "NOT A GIGGLE, NOT A CHORTLE, NOT EVEN A SMILE."
FROM THE TCI WIRE:
Starting with war resister news, Ehren Watada's father, Bob Watada, shared Saturday of how his son's struggle has inspired him.  Ehren Watada, in June 2006, became the first officer to publicly refuse to deploy to Iraq.  In February 2006, his court-martial ended a mistrial and his next court-martial is scheduled for July 16th.  Brian Charlton (AP) reports that Bob Watada spoke Saturday at a Honolulu meeting of the Society of Professional Journalists where he explained, "It was because of him that I've gone out and educated myself."  Charlton notes the stroke Rosa Sakanishi (Ehren's step-mother) suffered.  That was in January at the rally in DC, shortly after Bob Watada spoke.  Ann Wright managed to catch Sakanishi as she was falling.

THIS JUST IN! DON'T DINE OUT WITH MAINSTREAM PRESS!

BULLY BOY PRESS & CEDRIC'S BIX MIX -- DC.
THIS AFTERNOON, THESE REPORTERS ANSWERED A CALL FROM MAINSTREAM PRESS WHO "NEEDED TO TALK, REALLY, REALLY BAD" AND SUGGESTED WE MEET UP AT CAPITAL Q.
MAINSTREAM PRESS ARRIVED LATE AND, ONCE SEATED, MONOPOLIZED THE CONVERSATION.
"DO I LOVE RUDY OR MCCAIN?"  WONDERED MAINSTREAM PRESS ENDLESSLY.
"WHO'S A WINNER?  WHO IS A WINNER!"
MAINSTREAM PRESS STOPPED DRUMMING THE TABLE WHEN THE FOOD ARRIVED; HOWEVER, MP STILL MONOPOLIZED THE CONVERSATION.
"AND, I HAVEN'T EVEN REALLY FACTORED IN FREDDIE AND NEWT!"  MAINSTREAM PRESS SAID, WITH A MOUTHFUL FULL OF FOOD.
AFTER GOING ON AND ON ABOUT A DECISION THAT WAS A YEAR AND A HALF AWAY, MAINSTREAM PRESS SUDDENLY HAD TO "DASH" AND RUSHED OFF LEAVING THESE REPORTERS WITH THE CHECK.
LESSON: DON'T DINE OUT WITH THE MAINSTREAM PRESS: THEY BORE YOU WITH THEIR 'PROBLEMS' AND STICK YOU WITH THE CHECK.
FROM THE TCI WIRE:
Starting with news of war resistance.  The sound you here is a long WHIIIIINE as a spoiled brat gets a public spanking.  Clancy Sigal (at The Daily Trojan) walks spoiled brat through some basic realities in his response column to the realities of broken contracts:
We've been here before during Vietnam, when the desertion rate skyrocketed as soldiers, sailors and marines began to realize what a bogus, pointless war it was.  War-resistance inside the military, including going AWOL, finally broke the Army and forced the Nixon administration to the bargaining table.  Once again we're faced with a dilemma: Who violated the 'contrat' -- the government or the runaway soldiers?  Pope Benedict XVI deserted the Nazi Wehrmacht.  Muhammad Ali refused to serve in the Vietnam War, which he believed was racist and warranted.  And so it goes.  Does the U.S. government, and its military and Veterans Administration, honor or dishonor its 'contract' by forcing combat-weary GIs back into battle through its notorious 'stop loss' policy of refusing to discharge soldiers on due ldate and extending their deployments in a horrendous civil war?  Does the Pentagon honor its obligation when it sends medically unfit soldiers back to the meat-grinder - and, again notoriously, without the proper equipment or weapons?
Again, the sound you hear is a pampered, spolied brat getting a public spanking via Clancy Sigal.  In other news of war resisters, Bully Boy's escalation has had many effects -- more Iraqis killed, more US service members killed and Linjamin Mull, Patrick Maloney (Canoe News) reports, reached the decision to self-check out of the US military and move to Canada following Bully Boy's announcement.  Linjamin Mull was a NYC social worker who signed up as a result of "a crushing student debt" and achieved the rank of specialist in the army.  Meanwhile, Jenny Deam (Denver Post) reports on Justin Colby who served as a medic in Iraq and made the decision to self-check out on July 4th of last year and moved to Canada.  Deam notes, "Army figures released last week show 1,710 soldiers have deserted in the past six months.  The numbers are rising as the war goes on: 3,101 walked away between October 2005 and October 2006; 2,659 walked away during the 12 months before."
Yes, it is a movement, a growing movement, an ever growing movement.  Mull and Colby are part of a movement of war resistance within the military that also includes Dean Walcott,
Ehren Watada (whose next court-martial is scheduled for July 16th), Camilo Mejia, Robert Zabala, Darrell Anderson,  Kyle Snyder , Corey Glass, Jeremy Hinzman, Joshua Key, Ricky Clousing, Mark Wilkerson, Agustin Aguayo, Camilo Mejia,  Patrick Hart, Ivan Brobeck, Aidan Delgado, Pablo Paredes, Carl Webb, Jeremy Hinzman, Stephen Funk, David Sanders, Dan Felushko, Brandon Hughey, Clifford Cornell, Joshua Despain, Katherine Jashinski, Chris Teske, Matt Lowell, Jimmy Massey, Tim Richard, Hart Viges, Michael Blake and Kevin Benderman. In total, thirty-eight US war resisters in Canada have applied for asylum.
Information on war resistance within the military can be found at Center on Conscience & War, The Objector, The G.I. Rights Hotline, and the War Resisters Support Campaign. Courage to Resist offers information on all public war resisters.
RECOMMENDED: "Iraq snapshot"
"Laura Flanders Blue Grit Tour"
"Other Items"
"al-Sadr bloc exits?"
"And the war drags on . . ."
Isaiah's The World Today Just Nuts "Limited Engagement"
"Dexy's daughter, proud to be a dumb ass"
"It sure looks like a movement (except to some)"
"NYT: Keeps pimping 'International Zone'"
"Ruth's Report"
"Macaroni Coleslaw in the Kitchen"
"Truest statement of the week"
"A Note to Our Readers"
"Editorial: The disgusting silence on war resisters..."
"TV: Wasted away in second banana-ville"
"1 Book, 5 Minutes"
"Don Imus"
"Mailbag"
"What Would A Mud Flap Say If A Mud Flap Could Flap..."
"10 CDs listened to while writing this edition"
"Highlights"
"McCain News"
"VOTE INSANE! VOTE JOHN MCCAIN!"
"THIS JUST IN! TIRED OLD HOOKER"
"You know his price"
Ahhh...imagining that irresistible "new car" smell?
Check out new cars at Yahoo! Autos.
Posted by Wally at 6:15 PM