THIS JUST IN! ALL OF HILLARY'S MALE SUPPORTERS ARE CREEPY!

MR. KNOW IT ALL ALL PETER ROSENTEIN PUT ON HIS BIG GIRL PANTIES TODAY IN AN ATTEMPT TO LECTURE WOMEN IN AN ESPECIALLY CONDESCENDING TONE:

I hope Maya, Sylvia, Elise and others come to understand while Hillary may not be perfect, she will stand up and fight for their rights like no man ever could.

AND WE HOPE PETEY ROSE UNDERSTANDS THAT BEING A WOMAN OR A FEMINIST DOES NOT MEAN YOU JUST VOTE FOR OTHER WOMEN.

WE'RE ALSO HOPING PEOPLE REALIZE JUST HOW STUPID HE IS.


QUESTION: John, there was a delegation of Shabak religious community leaders to Washington and they met with State Department leaders. I was wondering whether you have a readout of that.


MR KIRBY: Yeah, there are some meetings today, actually. So as part of an effort to strengthen our partnership with Iraq and to engage communities across Iraq, including those who have joined the fight against ISIL, the State Department welcomed the visit of a group of leaders from Iraq’s Shabak community Washington. The group is meeting today with Population, Refugees, and Migration Bureau Acting Principal Deputy Assistant Larry Bartlett and had a working-level meeting with representatives from the Department’s Democracy, Human Rights, and Labor and Near East Asia Affairs Bureaus last week. So there were meetings last week; there are meetings today.
In these meetings, State Department officials expressed our condolences for the suffering that minorities, including the Shabak community, have endured at the hands of ISIL; discussed how to enhance cooperation in the fight against ISIL; and described our contributions to meeting the desperate humanitarian needs of refugees and those displaced by the conflict in Iraq and Syria.


QUESTION: Yesterday I met with some of them, and they said they had one specific demand for the State Department, which was they want to have their own all-Shabak member security unit, force, to protect them, like the Kurds have, the Sunnis. They’re trying to have one. Is the United States supportive of this kind of force that is – that all of its members are, like, really belong to one community?


MR KIRBY: I’ve not heard that request before. What we are supportive of, and have been very clear about this, is an inclusive, representative Iraq which includes an inclusive, representative Iraqi Security Force that is well-coordinated and integrated across all the sectors of Iraqi society. That’s what Prime Minister Abadi has committed himself to and has instituted policies to effect that, and that’s what we’d like to see continue.

Religious minorities are under attack in Iraq but, please note, they're only of interest to the US State Dept if and when they can join in the fight against the Islamic State.

Take that, Quakers! And any other pacifist religion or denomination.

The United States is no longer interested in your plight, nor willing to meet a delegation representing you, unless you vow to take up arms.

By this standard, turn the other cheek Jesus Christ would not be ushered in to visit the sleazy US State Dept.

This refusal to meet with anyone unless they take up arms goes a long, long way towards explaining how nuns have repeatedly been ignored by the John Kerry State Dept. 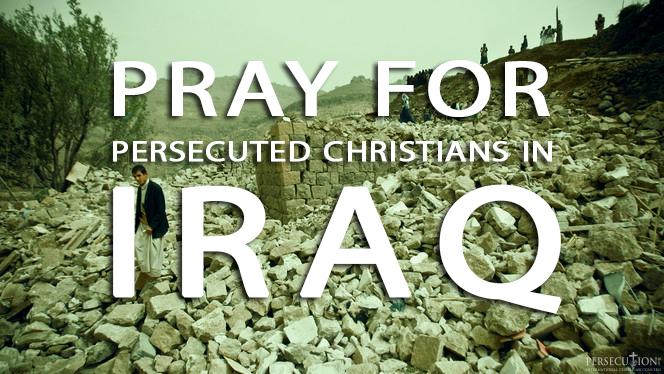 Yes, pray for the Iraqi Christians -- especially as long as John Kerry heads that US State Dept because they will need those prayers.

There's no effort to improve their lives or stop their suffering.

Not while John's around.

Alleged good Catholic John Kerry is far too busy with photo ops to attend the suffering of the Iraqi Christians.

He'll gladly blather on about his religion but when it comes to walking the talk, he's no where to be found.

The John Kerry State Dept was supposed to mean so much and it instead means so damn little.

There's the shame and scandal of Hillary Clinton -- which John should have washed his hands of but instead has acted as a co-conspirator.

There's the inability to accomplish anything diplomatically (the Iran deal came from the White House and its roots pre-date John joining the administration).  There's the increased militarization of the State Dept.  There's the dereliction of duty with regards to Iraq.

And 'good Catholic' John can't even get his house in order enough to address the suffering of Iraq's religious minorities (unless they want to take up arms!).

He's 71 and he's already had a bout with prostate cancer.  I'm not sure how many years he thinks he has left.

But apparently John's under no pressure to come to terms with what his life will have actually meant or how little he will have accomplished.


While John Kerry embarrasses himself and shames himself, Lara Logan (CBS News) reports on the realities for Iraqi Christians today:

And nothing is sacred. ISIS blew up this mosque just over a month after taking here -- it's a site holy to both Christians and Muslims because the Old Testament prophet Jonah was said to be buried inside.
Just like the Nazis marked the property of Jews, Christian homes in Mosul have been marked with this red symbol. It's the Arabic letter N - for Nasara - an early Islamic term for Christians. When ISIS puts it on your home, you either convert to Islam, pay an extortion tax or face the sword.
Issah Al Qurain is one of tens of thousands who had to make that choice. He was at home with his family in the Christian village where he'd lived all his life, when ISIS fighters came looking for him. He told us the fighters first took all his money - then his wife and children.

Issah Al Qurain (translated): Yes, convert. In the beginning, I refused. I told them I was Christian and I had my religion and they had their religion. But they told me, if you don't convert, we will kill you and take your wife and children.


He agreed and was taken to Mosul to convert where he was reunited with his family. Soon, ISIS fighters were asking about his young daughter, and he told us that frightened him more than anything.
Issah Al Qurain (translated): They said to me that in Islam, the Sharia says, girls that are 10 years old should get married. As soon as they left, my wife and I shut the door. We looked at each other and she started to cry and pray. We were so scared they were going to take our daughter from us.
They escaped in the back of a taxi. Issah says they talked their way through three ISIS checkpoints and traveled for over four hours on back roads to Erbil where, like Archbishop Sharaf, they now live as refugees.


Next week, the Pope visits the United States.  Pope Francis is scheduled to meet with US President Barack Obama during the visit (September 22nd - September 27th).

It should make for an interesting visit with many awkward silences.

Pope: And what are you doing to aid Iraqi Christians?

RECOMMENDED: "Iraq snapshot"
"War Planes and Bombs (believe it or not) still don..."
"No one to blame but herself"
"Oh, Neil"
"The Sunni genocide"
"Oh, Suzette, do shut up"
"The Mindy Project"
"I've got no dog in the fight"
"Charlie's Angels"
"something to think about"
"The sad Matt Damon"
"The way it is"
"THIS JUST IN! EVEN CRANKY DOESN'T KNOW THE REAL CRANKY CLINTON!"
"Who is Cranky Clinton?"
Posted by Wally at 4:01 PM

THIS JUST IN! EVEN CRANKY DOESN'T KNOW THE REAL CRANKY CLINTON!

THE WOMAN WHO HAS BEEN CAMPAIGNING AS A PROGRESSIVE IS NOW INSISTING SHE IS A MODERATE.

WHICH BEGS THE QUESTION: DOES THE CRAZY POLITICIAN HAVE ANY IDEA WHO SHE REALLY IS?

CRANKY CLINTON'S SO INAUTHENTIC SHE CONFUSES EVEN HERSELF.


The investigative committee of the US House of Representatives has summoned Pentagon officials for a briefing about allegations of manipulated intelligence about the war against the Islamic State (Isis).
Jason Chaffetz, the chairman of the Committee on Oversight and Government Reform, and Ron DeSantis, who chairs its national-security subcommittee, asked the defense secretary, Ashton Carter, and inspector general, Jon Rymer, on Friday for information about an ongoing investigation into charges from dozens of US Central Command and Defense Intelligence Agency analysts that their superiors suppressed negative assessments of the year-old war against Isis.

In a sign of escalating congressional interest in an unfolding controversy, the GOP lawmakers requested briefings no later than 18 September.


The Guardian article features a photo of Rep Jason Chaffetz with the  disgusting Elijah Cummings standing near him.  Cummings cared about Iraq only when Bully Boy Bush was in office.  Even worse, he cared about transparency only when Bully Boy Bush was in office.  Benghazi found him squealing that this was an effort to destroy US President Barack Obama.  After two years of him sputtering that off key whine, he switched to this is an effort (the same effort) to destroy Hillary Clinton's chances at the presidency.


Now with analysts saying their own intel is being cooked, where does the vile Elijah Cummings stand?


Yet again, he's not rushing to demand transparency.


Cummings only cares about transparency when he can use it as a partisan weapon.


Today, Rep Ron DeSantis' office issued the following:
Sep 14, 2015
Press Release
Washington, DC – Rep. Ron DeSantis (FL-06), chairman of the Subcommittee on National Security, has sent letters to Secretary of Defense Ashton Carter and Department of Defense Inspector General Jon Rymer concerning allegations that officials have altered intelligence reports regarding the military campaign against the Islamic State in Iraq. Chairman of the House Committee on Oversight and Government Reform, Jason Chaffetz (UT-03), joined DeSantis in sending these letters. DeSantis issued the following statement:
“I am concerned by allegations that political objectives are being taken into consideration regarding our national security. The data collected by our military personnel and intelligence agents is critical to accurately addressing threats and should not be influenced or altered to fit an advantageous political narrative. The Committee is taking these reports very seriously and we will investigate fully.”


News that senior U.S. intelligence officials may have doctored analysis on the Islamic State weighs heavily on Washington. It suggests that President Barack Obama's intelligence apparatus didn't learn from the costly failures of the Bush era.
The Daily Beast reported late Wednesday that more than 50 intelligence professionals have formally complained that their analysis of the Islamic State, also known as ISIS, and of Syria's al Qaeda branch, al Nusra, was altered by U.S. Central Command higher-ups in order to make the U.S. military campaign to defeat those groups look more successful than it actually was.


And with the reports come questions and speculation.

James Clapper.  It's not often someone perjures themselves before Congress, has perjury exposed and is not then asked by the White House to resign.


But Barack's been peachy keen on having professional liar James Clapper remain a part of the administration.

RECOMMENDED: "Iraq snapshot"
"'The empire of chaos'"
"Hejira"
"Drum Corps World"
"Cranky Clinton"
"Whips in the Kitchen"
"The Mindy Project"
"Extant"
"she's a pinto with a bad tire"
"With Hillary, there's the sewer and then a lower gutter"
"Must read"
"The Originals"
"The press has grown bored with Iraq again"