THIS JUST IN! CRANKY RESPONDS IT'S ALL ABOUT HER ALWAYS!

THE EVER CRANKY CLINTON TOOK TIME OUT FROM SH**TING IN THE WOODS TO SPEAK TO THESE REPORTERS ABOUT HER LATEST ENABLING OF A PREDATOR.

"EXCUSE ME, BUT I WAS BREAKING THE GLASS CEILING," CRANKY BARKED AT THESE REPORTERS BETWEEN TAKING BITES OF A LIVE PARROT THAT LOOKED A GREAT DEAL LIKE TWEETY BIRD.  "THAT'S A LOT MORE IMPORTANT THAN SOME TOOTSIE IN A PUSH UP BRA FEELING LIKE SHE'S BEING HARASSED.  BEING HARASSED?  SHE SHOULD HOPE TO BE HARASSED ON MY BEHALF.  I'M ALL ABOUT ME-ISM, NOT FEMINISM.  ME FIRST.  ME ALWAYS.  ME FOREVER."

AS FOR THE FACT THAT THE MAN SHE COVERED UP FOR IN 2008, HER FAITH ADVISOR BURNS STRIDER AND HE CONTINUED TO HARASS WOMEN AS LATE AS 2016.

CRANKY REMAINS DEFENSIVE ABOUT THE ISSUE AND INSISTS, "I NEVER SAID 'I'M WITH YOU,' THE SLOGAN WAS 'I'M WITH HER.'  THAT'S ME.  HILLARY CLINTON.  ME.  YOU WERE WITH ME.  I WAS NOT WITH YOU.  SO IF A FEW LITTLE BIMBOS GOT HURT ALONG THE WAY, TOO BAD.  THIS WAS ALL ABOUT ME!"

Abd al-Falah al-Sudani is said to be in Iraqi custody.   al-Sudani served in Nouri al-Maliki's Cabinet of Ministers from 2006 through 2009.  He was brought down by corruption charges.  As Minister of Trade, he first tried to pin the corruption in the ministry on underlings.  When that wasn't good enough and after the Parliament gave him a vote of no-confidence (stripping him of his immunity) he tried to flee the country in May of 2009.

Abdul Falah al-Sudani was aboard a flight to Dubai from Baghdad International Airport when police contacted the pilot and told him to fly back to the airport, Sabah al-Saedi, chairman of Iraq's parliamentary integrity committee told CNN. Al-Sudani -- arrested on a warrant issued in Samawa on Saturday -- was seized after the plane landed, al-Saedi said.


AP reports, "The fight against corruption is emerging as a major issue in Iraq, with many Iraqis convinced that graft and government mismanagement are nearly as a great a threat to the country as armed insurgency."

It's a cute little game the Iraqi government plays -- regardless of who heads it -- this interest in preventing corruption.

al-Sudani is a member of Dawa, the political party of both former prime minister Nouri al-Maliki and the current prime minister Hayder al-Abadi.  Whenever an election is approaching, suddenly Iraq's prime ministers care about corruption.  In May of 2009, elections were supposed to take place later that fall.  They were pushed back when the election law could not be approved in time -- this was due to then-Vice President Tareq al-Hashemi using his power to veto the bill due to the vast number of Sunni refugees that would not be allowed to vote under the proposal.  Sunni refugees will again be denied the vote if elections are held this May but apparently no one wants to stand up and defend them.

The arrest of al-Sudani received a great deal of press attention.

Questioning the minister of trade was a real big and new event for Iraqis who used to see the corrupt officials always abroad. During the last two week, the story of corruption was the main story of all Iraqis. The corruption in the Iraqi governmental departments dominated the conversations of all Iraqis. Some Iraqis started giving suggestions and solutions about fighting corruption.

Writes an Iraqi correspondent for McClatchy Newspapers in "One good but small step" (Inside Iraq). 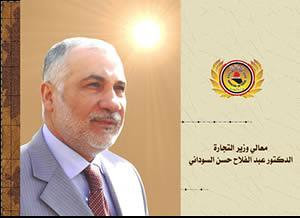 The Trade Minister Abed Falah al-Sudani resigned earlier this week in order to avoid charges brought by Parliament. Liz Sly (Los Angeles Times) reports that didn't quite work out the way he planned as al-Sudani attempted to leave Iraq by plane but the plane was ordered back "mid-flight":

When the plane landed at Baghdad's airport, Abdul Falah Sudani, the country's trade minister until he was forced to resign last week, was promptly arrested.
Sudani is charged with procuring substandard foodstuffs for Iraq's food-ration program, but the allegations against his ministry go beyond that. Omar Abdul Sattar, a member of the Iraqi parliament's anti-corruption committee, said the sums stolen could amount to "hundreds of millions of dollars."

Sly notes that in 2006, the Electricity Minister made it out of Iraq, from a jail cell in fact, and moved on to Chicago. Rather amazing when you consider how difficult it is and was for Iraqi refugees to make it to the US. BBC adds of today's arrest: "Officials said Abdul Falah Sudani had been on a flight to the United Arab Emirates which was asked to turn back to Baghdad so he could be arrested." Nada Barkri (Washington Post) reports:

The arrest warrant accuses Sudani, a 62-year-old dual British-Iraqi national, of stealing public money and mismanaging the ministry by importing expired foods and employing his relatives, including two brothers.
Authorities have issued hundreds of arrest warrants this year, 51 of which are against senior officials, as disenchantment grows over widespread and brazen corruption thought to run into the billions of dollars. Sabah al-Sudani, the minister's brother, was arrested this month in southern Iraq after being caught with $150,000, $50,000 of which he tried to use to bribe a policeman to let him go. The other brother, Majid al-Sudani, remains at large.
Sudani's resignation came two days before he appeared before parliament to answer questions about corruption in his ministry. Prime Minister Nouri al-Maliki waited until after the questioning to accept the resignation.


Strangely, or really not so strange, when he escaped from the country later, it received far less attention.  Just as the Minister of Electricity had 'escaped' in 2006 (following the 2005 elections), al-Sudani 'escaped' following the 2010 elections.

It's a big pretense, this fakery.

Hayder al-Abadi has had years to address corruption and has nothing to show for it but, elections are coming up, so he puts on a show.

Does that sound cynical?

But he wasn't in September.

And it was September 10, 2017 when al-Sudani was apprehended in Beirut.

A return then would have been lost while ISIS held major areas in Iraq.

But now, with elections due to be held in less than four months, al-Sudani's return to Iraqi custody is news and news that Hayder will attempt to use as evidence that he fights corruption.

Today, ALSUMARIA notes that Iraqi authorities went to Beirut and retrieved him this week.