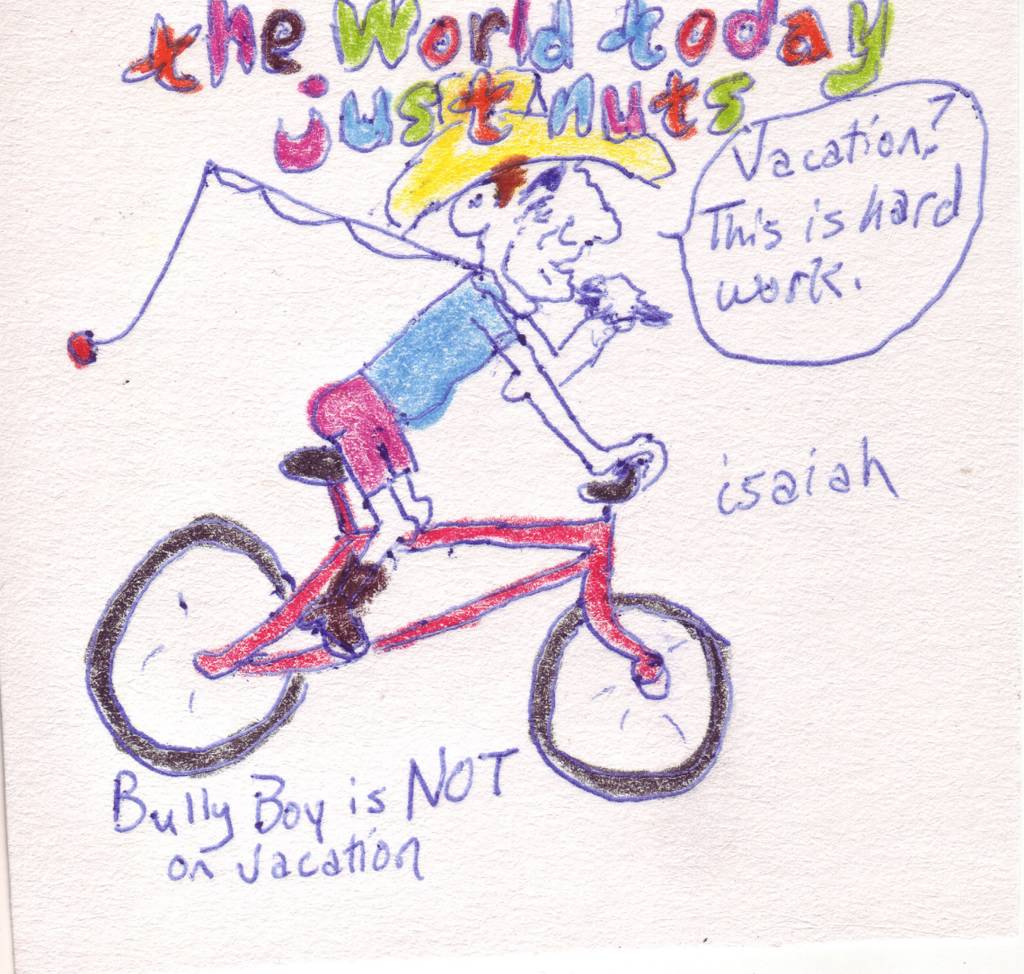 Reality is that about half the people on my grandfather's street have left. They got tired of waiting for the electricity to come back. It started getting too cold at night.

Bully Boy will have something to say on that if and only if the press starts following this.

I'm not expecting much from either.
Posted by Wally at 7:34 AM

Think of Chalabi as a chef. He cooked and fed Judy Miller most of her "reporting" and he cooked and fed the administration most of their "facts." Over 2,000 Americans are dead and some of that can be traced to Chalabi's "cooking."

If that happened at McDonalds, they'd fire his ass. But even though the administration shares with McDonalds a love for clowns, it doesn't share the basic accountability. So it's no surprise that Chalabi's being brought back in "from the cold." (For more on this, read "Other Items" and "NYT has to promote the AP today because NYT has little news.")

But it is disgusting. And it's one more sign of how there is no accountability in the Bully Boy administration.

Equally amazing is the New York Times which wants to do a mea culpa for their lousy reporting (a lot of it by Judy Miller) and wants to push the administration's "we were all wrong" party line but at the same time wants to promote Chalabi without acknowledging their own relationship with him which included hiring his niece.

Isaiah called it right regarding the state of the world today when he named his comic strip The World Today Just Nuts.

the daily jot
the common ills
the world today just nuts
the new york times
chalabi
Posted by Wally at 8:24 AM 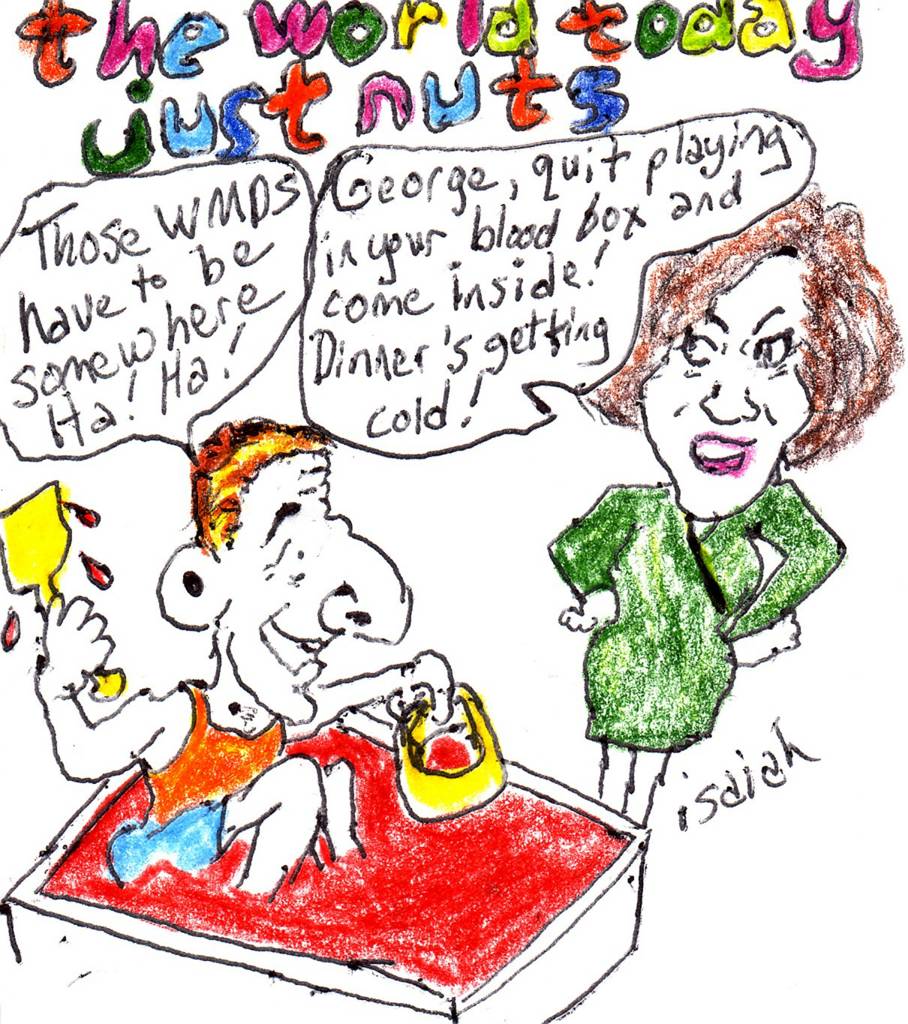 Thing above is Isaiah's The World Today Just Nuts from June 24th (and I used Rebecca's "isaiah resource" to track that down).

This morning, another neighbor was pulling out due to the lack of electricty so we were helping him tie down stuff to his car because he was going to stay with his son and not real sure when he'd be back.

Then we went and watched the thing we heard about last night at The Common Ills:

Brenda e-mails to note "Falluja....again and again" (Baghdad Dweller):
A new documentary released by Italian TV station "RAI" shows evidence that the US used chemical and Napalm weapons in Fallujha.Bodies burned without any traces of fire on the clothes and trust me there are many dead babies.
The documentary called "La strage nascosta" or "The hidden massacre" in English.You can watch the documentary in Arabic, English and Italian.

Use that link to watch. It'll blow your mind.

It was around this time last year that the slaughter in Fallujah started. Think about it and ask yourself what we're doing. Go read Mike from yesterday too. And don't expect to ever read any reality from Dexter Filkins.

the common ills
sex and politics and screeds and attitude
mikey likes it
the daily jot
iraq
the new york times
dexter filkins
Posted by Wally at 10:13 AM 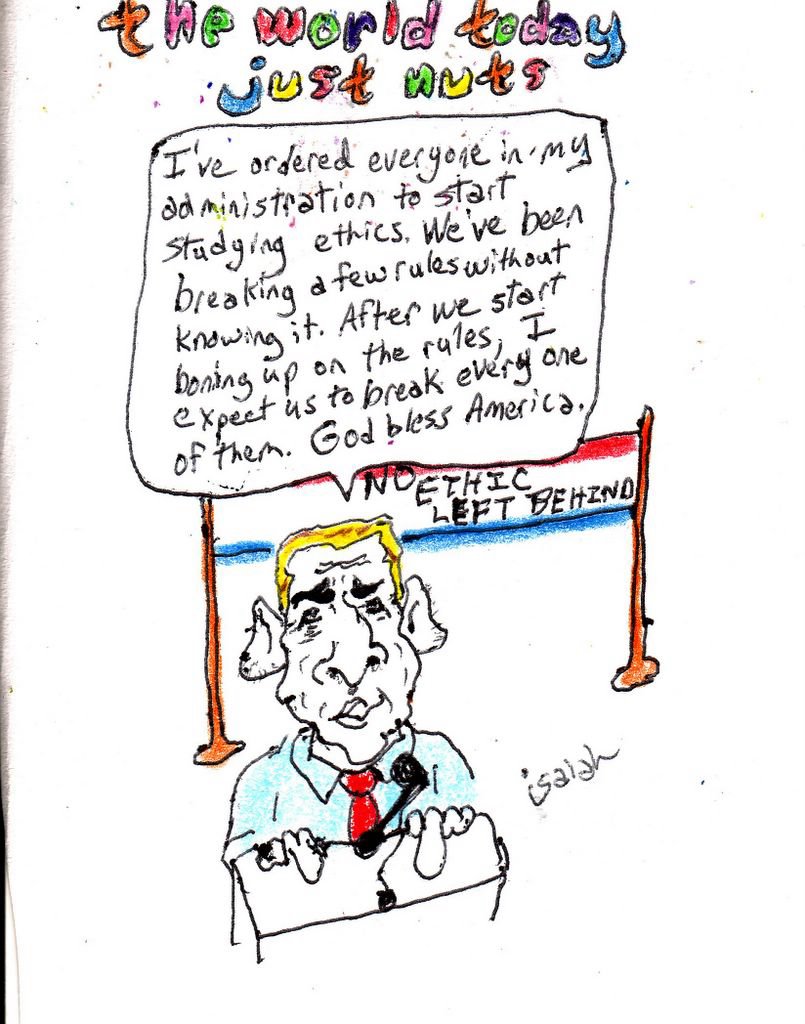 Let's all do our best Nelson "Ha-ha" as we think of Bully Boy ordering his staff into ethic's training. Isaiah's The World Today Just Nuts on this made me laugh but I had another thought:
What if they really paid attention in "ethics" training?

Would it lead to a mass exodus from the administration?

Focus on that cheery thought for the day.

Both U.S. military informants and testimony gathered by civil society leaders in Nineveh reported that the Kurds had spread the rumour in Nineveh province that voters who did not vote "yes" would lose their food ration cards. Many farmers and their families were said by the independent informant to have voted "yes" on the understanding that would ensure the renewal of their ration cards.
The picture of voting irregularities and fear in Nineveh sketched out in these reports from non-Sunni sources collected by the U.S. military and civil society groups support the complaints about electoral fraud by Sunni political figures. And they belie the official portrayal of the referendum as a step toward political legitimacy and democratic development.