Just weeks after a Soyuz booster failed and a crew was rocketed to safety the Russians are ready to return to manned flight, and Army Lt. Col. Anne McClain will be the first to sit atop that rocket since the accident.
Officials that investigated the failed October 11th launch from Baikonur space center in Kazakhstan, said they identified part of the reason for the accident that occurred two minutes into the flight, part of the first stage of the rocket had struck the second stage after separating, damaging the booster causing the first Soyuz failure in decades.

B-B-BUT WHAT WILL ROBERT MUELLER SAY!!!!

THESE REPORTERS CONTACTED THE KID-FRIENDLY AND PORTLY DIRECTOR ROB REINER WHO WAS BUSY PREPPING FOR HIS UPCOMING FLOP FILM AND HE TOLD US, "THIS IS TREASON! FOR LT COL ANNE MCCLAIN TO BE ON BOARD WITH THE RUSSIANS IS TREASON!"

ABC7 Eyewitness News‏Verified account @ABC7 23h23 hours ago
#LIVE: Neighbors are saying David Ian Long was a veteran who suffered from PTSD, "I have no idea what he was doing with a gun" abc7.la/2yZhMMl 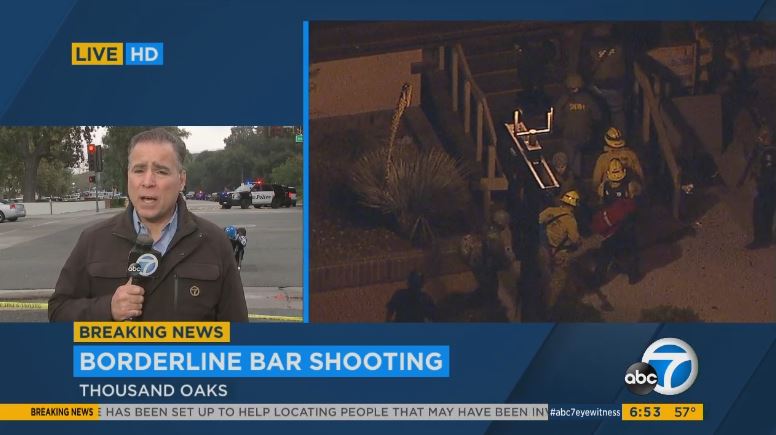 
He suffered with Post-Traumatic Syndrome?  But, by all means, let's give Bully Boy Bush an award for his 'work' with veterans -- you know, for killing them and wounding them.  For using them to try to distract from his War Crimes?

And let's pretend, while we're at it, that the wars themselves don't destroy the Ian Longs.  No, every veteran is not going to end up hurting people.  (Veterans with violence issues traditionally turn the violence on themselves.  Which does explain the high rates of  suicide.)  And there's no need to give rise to a stereotype.  But there's also no reason to deny that these ongoing wars effect a large number of people -- including those who serve in them.

Now it doesn't effect Bully Boy Bush.  He's still dumber than dirt.  His wallet's a lot thicker but he's still Satan incarnate and, if there's a hell, he'll get to know it quite well.

But Bully Boy Bush didn't serve in Iraq.  He sent others to serve.  He didn't serve himself.  He was too busy doing other things.  Hence the incomplete National Guard records.

Bully Boy Bush was happy enough to send men and women into war and he was happy enough to not "do body counts" (a lie, as we found out during the last week of KNIGHT RIDDER", in a Nancy Youssef report).  Now he thinks he can emerge from beneath his rock and accept an award.  The delusions of the entitled.

Shame on Joe Biden.  I love Joe but I'm appalled and this isn't something I'll forget.  If he gives out that award, I will not support him in a 2020 run.  His presenting that award shows he learned nothing from the Iraq War -- that he voted for.  He's learned nothing.  That makes him worse than Hillary.  Yes, she gave a weak ass apology but it's a hell of a lot better than what Joe Biden's about to do.

The Iraq War continues and bully Boy Bush is getting an award -- and Joe Biden's handing it to him.

RECOMMENDED: "Iraq, still occupied by the US government"
"Another Amazing Coincidence: Man Trained to Mass M..."
"Center for Reproductive Rights Sues to Block Ban o..."
"Some Tweets from Balsam Mustafa"
"Celebrate Armistice Day, Not Veterans Day"
"Some Tweets from Dahlia Wasfi"
"A Tale of Two Marines"
"Some Tweets from Sarah Abdallah"
"Dope Magazine"
"Some Tweets from Black Alliance for Peace"
"The mid-terms are over, now what?"
"Some Tweets for Margaret Kimberley"
"Iraq snapshot"
"Isakson: Significant Victories for Veterans"
"Schumer, Gillibrand Announce Over $79K In Federal ..."
"Senate Democrats to Secretary Azar: End Efforts to..."
"Iraq snapshot"
"Talk Nation Radio: Greta Zarro on Organizing a Wor..."
"Episode 107: Election Day Musings—Hear Beto, Katie..."
"Iraq snapshot"
"What Else You Can Do"
"Disability Voter Resource Guide 2018"
"Iraq snapshot"
"On the eve of the US midterm elections: The politi..."
"Iraq snapshot"
"Iraq: bombs and fish"
"Kat's Korner: Barbra Streisand, the Ethel Merman o..."
"Send Me To The 'Lectric Chair (Bessie Smith)"
"Thursday (Jess Glynee and Ed Sheeran)"
"THE INHERITANCE: POISONED FRUIT OF JFK'S ASSASSINATION"
"Margaret Kimberley"
"Thoughts on Taylor Swift and voting"
"R.F.K. and J.F.K."
"Greedy Streisand should be in prison"
"HOW TO GET AWAY WITH MURDER"
"EMPIRE brings on the Becky"
"NETFLIX, REVERIE, GOOD BEHAVIOR, Alec Baldwin"
"Worst show of the fall?"
"Some Green Tweets"
"Brief"
"The Women’s Suffrage Movement is an awful (and rac..."
"FDA recalls Duncan Hines Classic White cake mix"
"Do what you want (and be proud of that)"
"She's sorry"
"Forget the birds for a moment, let's talk about th..."
"Lung Cancer Awareness"
"The ozone"
"Curiosity and Opportunity"
"Music"
"French Fry Casserole in the Kitchen"
"Raw Turkey warning from CDC"
"The CIA and Barack's war on whistle-blowers"
"The answer to greed? Socialism"
"Fake asses (Andrea Mitchell, Barbra Streisand)"
"a scam"
"glenn nails it"
"only surprise for me was bill nelson"
"barbra streisand is an idiot and bully boy bush is..."
"the censored documentary and the 1st joni mitchell..."
"A child of God is not born a killer"
"Win a trip to Vegas to see Cher"
"Penguin's embarrassing and racist book on feminism"
"Pot"
"Jeffrey St. Clair calls it"
"The hysteria's being pimped again"
"You are the problem"
"Joni's birthday"
"Screw POD SAVE AMERICA"
"Stevie Nicks"
"She really is a greedy whore"
"How much plastic surgery has Bette Midler had?"
"American Horror Story"
"I did not care for Reverie"
"Some book thoughts"
"Idiot of the week?"
"More on MODERN FAMILY"
"MODERN FAMILY (spoilers)"
"France frets that we (the US) may attack"
"What happened to Russia-gate? And what happened to hideous Lambert?"