THIS JUST IN! BULLY BOY SAYS "DO AS I COMMAND NOT AS I DO."

BULLY BOY SAYS "DO AS I COMMAND NOT AS I DO."

HAVING COMPLAINED ABOUT LEAKS REPEATEDLY, DC IS A BUZZ TO LEARN THAT SCOOTS LIBBY WAS AUTHORIZED TO LEAK BY THE BULLY BOY.

THE PRESIDENT: Yes. Let me just say something about leaks in Washington. There are too many leaks of classified information in Washington. There's leaks at the executive branch; there's leaks in the legislative branch. There's just too many leaks. And if there is a leak out of my administration, I want to know who it is. And if the person has violated law, the person will be taken care of.

THE PRESIDENT: Listen, I know of nobody -- I don't know of anybody in my administration who leaked classified information. If somebody did leak classified information, I'd like to know it, and we'll take the appropriate action. And this investigation is a good thing.
And again I repeat, you know, Washington is a town where there's all kinds of allegations. You've heard much of the allegations. And if people have got solid information, please come forward with it. And that would be people inside the information who are the so-called anonymous sources, or people outside the information -- outside the administration. And we can clarify this thing very quickly if people who have got solid evidence would come forward and speak out. And I would hope they would.
And then we'll get to the bottom of this and move on. But I want to tell you something -- leaks of classified information are a bad thing. And we've had them
-- there's too much leaking in Washington. That's just the way it is. And we've had leaks out of the administrative branch, had leaks out of the legislative branch, and out of the executive branch and the legislative branch, and I've spoken out consistently against them and I want to know who the leakers are.
WHITE HOUSE STAFF WAS OBSERVED DRAWING STRAWS AT THE END OF THE DAY TO DETERMINE WHO WOULD HAVE TO EXPLAIN TO BULLY BOY FRIDAY MORNING THAT HE WAS THE LEAK.
Recommended: "NYT: A funny kind of 'balance'"
"mini essay "
"Ireland"
"This isn't finished but Blogger's about to go down "
"Some Highlights"
Posted by Wally at 8:33 PM

THIS JUST IN! BULLY BOY SAYS HE WON'T STEP DOWN!

THIS JUST IN! TOM DELAY WANTS TO HELP SOMEONE ELSE! 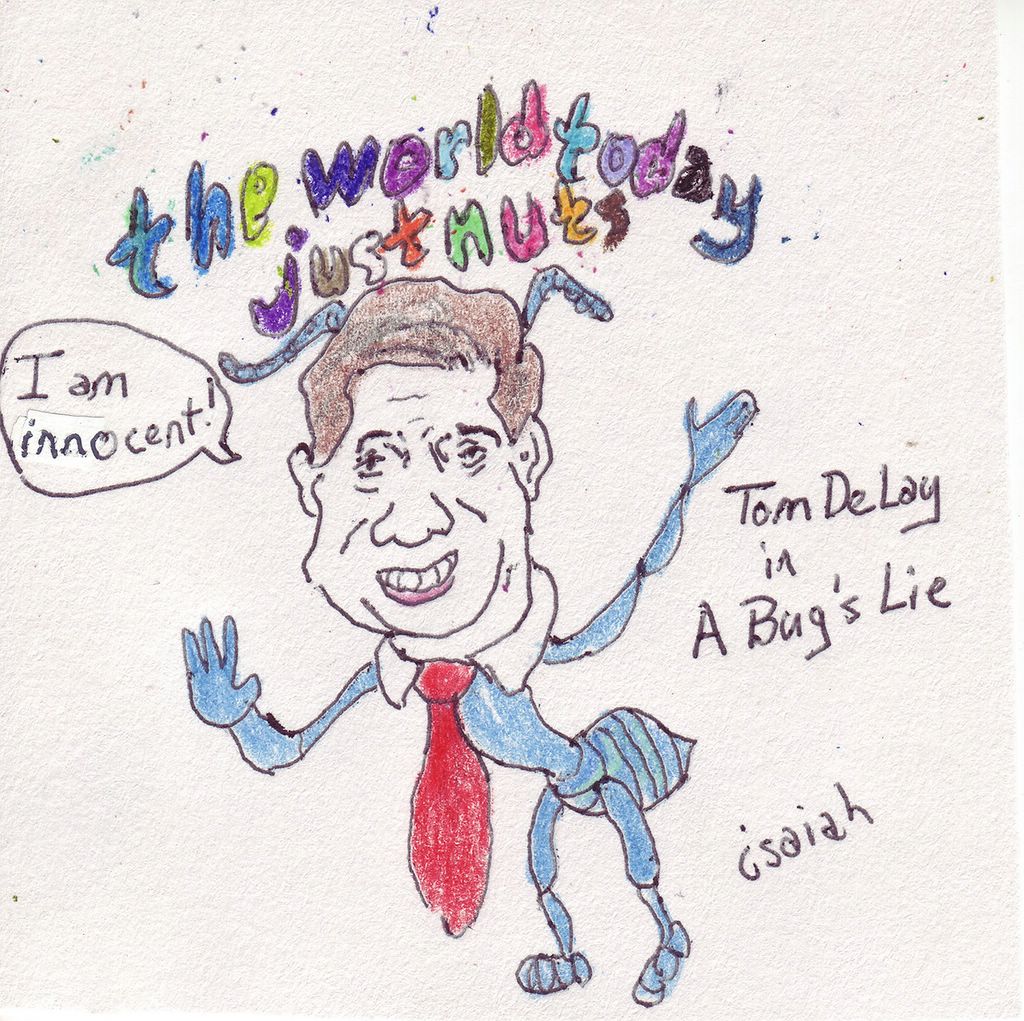 THIS JUST IN! BAD DAYS FOR BULLY!

BULLY BOY PRESS - DC.
THIS JUST IN!
BAD DAYS FOR BULLY!
BULLY BOY HAS GONE FROM TEFLON MAN TO S**T SOAKER.
IN THESE BAD DAYS FOR BULLY, EVEN HIS LAP DOGS START TO BITE AS THEY TRY TO BUILD A WALL BETWEEN BULLY BOY AND THEMSELVES IN TIME FOR THE 2006 CONGRESSIONAL ELECTIONS.
BULLY BOY WHINED THAT THE LOSE OF HIS FOLLOWERS MADE ABOUT AS MUCH SENSE AS THE ELECTRICITY GOING OFF TODAY IN THE U.S. CAPITOL WHICH WAS THEN EVACUATED.
"I JUST DON'T GET IT,"  BULLY BOY WHINED.  "NOW I EVEN GOT TO BRIEF CONGRESS ABOUT WHAT I AM PUSHING. . . . WELL REPUBLICANS IN CONGRESS."
BULLY BOY WAS REFERRING TO A "NO-BID $6 MILLION CONTRACT [WHICH] REPRESENTS THE FIRST TIME A FOREIGN COMPANY WILL BE INVOLVED IN RUNNING SOPHISTICATED U.S. RADIATION-DETECTION EQUIPMENT AT AN OVERSEAS PORT WITHOUT THE PRESENCE OF U.S. CUSTOMS AGENTS."
"THINGS ARE TOUGH," ACKNOWLEDGED BULLY BOY, "I CAN'T EVEN GET CHARLES TAYLOR ON SPEED DIAL AND PEOPLE ARE SAYING I THROW LIKE A GIRL."
Recommended: "And the war drags on . . ."
"NYT: Edward Wong tells you that questions about Carroll were raised by a video (as opposed to, say, the press?)"
"The first principle of non-violent action is that of non-cooperation"
"Good morning. We're going to dive right in with D..."
"Harry Belafonte's Calypso"
"Tortilla Soup in the Kitchen"
"TV Review: What happens on Vegas will bore you to tears"
"5 CDs that got us through the week"
"Editorial: That's what it sounds like when bullies bluster"
"Ruth's Public Radio Report"
"Bad Moments of Bully Boy Bluster"
"NYT: Could someone explain the difference between 'casualty' and 'fatality' to Wong and Semple?"
"EXCLUSIVE...Noam Chomsky on Failed States: The Abuse of Power and the Assault on Democracy."
"Noam Chomsky on Iraq Troop Withdrawal, Haiti, Democracy in Latin America and the Israeli Elections"
like maria said paz
mikey likes it
the third estate sunday review
trinas kitchen
cedrics big mix
ruths public radio report
the world today just nuts
bully boy
comic
bad moments of bully boy bluster
democracy now
noam chomsky
How low will we go? Check out Yahoo! Messenger’s low PC-to-Phone call rates.
Posted by Wally at 4:37 PM