THIS JUST IN! TARAJI P. HENSON IS ON A MISSION!

TARAJI P. HENSON EXCLUSIVELY INFORMED THESE REPORTERS -- MUST CREDIT BULLY BOY PRESS &  CEDRIC'S BIG MIX  & ANN'S MEGA  DUB & THOMAS FRIEDMAN IS A GREAT MAN  -- THAT "TOO MANY ORGANIZATIONS FAIL TO DO THE REAL WORK.  WHAT'S HAPPENED TO MY BOI JUSSIE HAS MADE THAT CLEAR.  JUSSIE SMOLLETT SHOULD BE CELEBRATED THE WAY AMOS & ANDY SHOULD BE CELEBRATED.  CALL IT KEEPING IT REAL OR LOWERING EXPECTATIONS OR EMBRACING THE MOST BASE AND BANAL BUT I WANT TO LOWER MY PEOPLES, I WANT TO BRING THEM DOWN TO THE GUTTER WITH ME.  THAT'S WHY I FIGHT FOR JUSSIE SMOLLETT TO BE BROUGHT BACK ON EMPIRE.  THAT'S WHY I WANT US TO BE ALL ABOUT GHETTO FABULOUS -- I AM THE MOST FABULOUS THING IN THE GHETTO.  NDAAP, THE NATIONAL DEGRADATION OF AFRO-AMERICAN PEOPLES WILL HELP US WALLOW IN BLAXPLOTATION FILMS AND SHOWS AND CELEBRATE FRAUDS AND CRIMINALS."

AS SHE WAS ABOUT TO RING OFF, HENSON BLURTED OUT, "ONE MORE THING.  IN MY ATTEMPT TO FURTHER DISGRACE MY OWN RACE, I'VE DECIDED MY NEXT BOX OFFICE BOMB WILL BE 'THE TAWANA BRAWLEY STORY.'  I THINK TAWANA AND THE HOAX THERE STANDS AS ONE OF THE MOST EMBARRASSING MOMENTS IN BLACK HISTORY AND I CANNOT WAIT TO TRY TO PROFIT FROM IT.'"

CBS Evening News‏Verified account @CBSEveningNews 12h12 hours ago
The intelligence about threats of a possible Iran attack, which U.S. officials called "real and urgent," warned of attacks on American ships off the waters of Yemen and in the Persian Gulf itself, as well as against American troops in Iraq and Syria cbsn.ws/2J4QESu
1:33
10.1K views
20 replies49 retweets57 likes


Gulf of Tonkin? From WIKIPEDIA:

The Gulf of Tonkin incident (Vietnamese: Sự kiện Vịnh Bắc Bộ), also known as the USS Maddox incident, was an international confrontation that led to the United States engaging more directly in the Vietnam War. It involved either one or two separate confrontations involving North Vietnam and the United States in the waters of the Gulf of Tonkin. The original American report blamed North Vietnam for both incidents, but eventually became very controversial with widespread belief that at least one, and possibly both incidents were false, and possibly deliberately so. On August 2, 1964, the destroyer USS Maddox, while performing a signals intelligence patrol as part of DESOTO operations, was pursued by three North Vietnamese Navy torpedo boats of the 135th Torpedo Squadron.[1][5] Maddox fired three warning shots and the North Vietnamese boats then attacked with torpedoes and machine gun fire.[5] Maddox expended over 280 3-inch (76.2 mm) and 5-inch (127 mm) shells in a sea battle. One U.S. aircraft was damaged, three North Vietnamese torpedo boats were damaged, and four North Vietnamese sailors were killed, with six more wounded. There were no U.S. casualties.[6] Maddox "was unscathed except for a single bullet hole from a Vietnamese machine gun round."[5]
It was originally claimed by the National Security Agency that a Second Gulf of Tonkin incident occurred on August 4, 1964, as another sea battle, but instead evidence was found of "Tonkin ghosts"[7] (false radar images) and not actual North Vietnamese torpedo boats. In the 2003 documentary The Fog of War, the former United States Secretary of DefenseRobert S. McNamara admitted that the August 2 USS Maddox attack happened with no Defense Department response, but the August 4 Gulf of Tonkin attack never happened.[8] In 1995, McNamara met with former Vietnam People's Army General Võ Nguyên Giáp to ask what happened on August 4, 1964 in the second Gulf of Tonkin Incident. "Absolutely nothing", Giáp replied.[9] Giáp claimed that the attack had been imaginary.[10]
The outcome of these two incidents was the passage by Congress of the Gulf of Tonkin Resolution, which granted President Lyndon B. Johnson the authority to assist any Southeast Asian country whose government was considered to be jeopardized by "communist aggression". The resolution served as Johnson's legal justification for deploying U.S. conventional forces and the commencement of open warfare against North Vietnam.
In 2005, an internal National Security Agency historical study was declassified; it concluded that Maddox had engaged the North Vietnamese Navy on August 2, but that there were no North Vietnamese naval vessels present during the incident of August 4.
[. . .]

The use of the set of incidents as a pretext for escalation of U.S. involvement follows the issuance of public threats against North Vietnam, as well as calls from American politicians in favor of escalating the war.[39] On May 4, 1964, William Bundy called for the U.S. to "drive the communists out of South Vietnam", even if that meant attacking both North Vietnam and communist China.[39]Even so, the Johnson administration in the second half of 1964 focused on convincing the American public that there was no chance of war between the United States and North Vietnam.[39]
North Vietnam's General Giap suggested that the DESOTO patrol had been sent into the gulf to provoke North Vietnam into giving an excuse for escalation of the war.[39] Various government officials and men aboard Maddox have suggested similar theories.[39] American politicians and strategists had been planning provocative actions against North Vietnam for some time. George Balltold a British journalist after the war that "at that time ... many people ... were looking for any excuse to initiate bombing".[39]
According to Raymond McGovern, a retired CIA officer (CIA analyst from 1963 to 1990, and in the 1980s, chairman of the National Intelligence Estimates), the CIA, "not to mention President Lyndon Johnson, Defense Secretary Robert McNamara and National Security Adviser McGeorge Bundy all knew full well that the evidence of any armed attack on the evening of Aug. 4, 1964, the so-called "second" Tonkin Gulf incident, was highly dubious. ... During the summer of 1964, President Johnson and the Joint Chiefs of Staff were eager to widen the war in Vietnam. They stepped up sabotage and hit-and-run attacks on the coast of North Vietnam." Maddox, carrying electronic spying gear, was to collect signals intelligence from the North Vietnamese coast, and the coastal attacks were seen as a helpful way to get the North Vietnamese to turn on their coastal radars. For this purpose, it was authorized to approach the coast as close as 13 kilometers (8 mi) and the offshore islands as close as four; the latter had already been subjected to shelling from the sea.[40]
In his book, Body of Secrets, James Bamford, who spent three years in the United States Navy as an intelligence analyst, writes, that the primary purpose of the Maddox "was to act as a seagoing provocateur—to poke its sharp gray bow and the American flag as close to the belly of North Vietnam as possible, in effect shoving its five-inch cannons up the nose of the communist navy. ... The Maddox' mission was made even more provocative by being timed to coincide with commando raids, creating the impression that the Maddox was directing those missions ..." Thus, the North Vietnamese had every reason to believe that Maddox was involved in these actions.[41]
Provocative action against North Vietnam was considered after the August 1964 incidents. John McNaughton suggested in September 1964, that the U.S. prepare to take actions to provoke a North Vietnamese military reaction, including plans to use DESOTO patrols North. William Bundy's paper dated September 8, 1964, suggested more DESOTO patrols as well.[39]

The Trump administration is deploying air and sea strike forces to the Middle East in response to what it described as “troubling and escalatory indications and warnings” from Iran.
“In response to a number of troubling and escalatory indications and warnings, the United States is deploying the USS Abraham Lincoln Carrier Strike Group and a bomber task force to the U.S. Central Command region to send a clear and unmistakable message to the Iranian regime that any attack on United States interests or on those of our allies will be met with unrelenting force,” National Security Adviser John Bolton said Sunday evening in a statement.

So they send in the USS Abraham Lincoln Carrier Strike Group.  And, of course, they're deploying the press.  Barbara Starr's always willing to enlist.

Barbara Starr‏Verified account @barbarastarrcnn 20h20 hours ago
Just In: US officials tell me the threats from Iran included “specific and credible” intelligence that Iranian forces and proxies were targeting US forces in Syria, Iraq and at sea. There were multiple threads of intelligence about multiple locations, the officials said. #Iran
954 replies614 retweets835 likes


Today’s Washington Post front page might be 1 of the most propagandistic I’ve ever seen. Above the fold is a feature story on how Iran is taking over Iraq’s Shias. Below the fold is a story about how Bernie Sanders socialist views were influenced by the evil soviets in the 1980s. 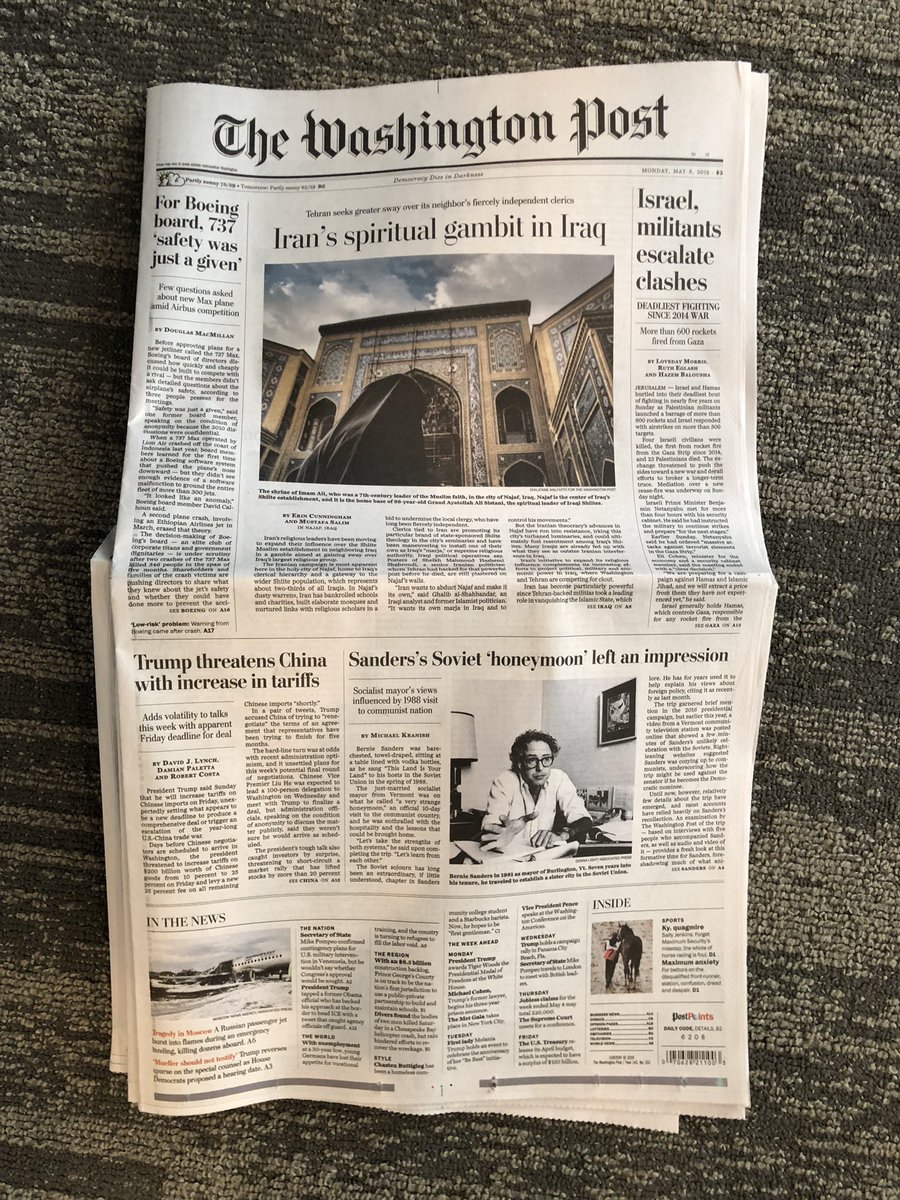