THIS JUST IN! THERE SHALL BE NO CRITICISM!

"THEY WILL ONLY PRAISE ME!" HISSED CRANKY CLINTON TODAY AS SHE OUTLINED HER GOALS IF SHE MANAGES TO STEAL THE PRESIDENCY.

"BUT ONCE I AM CROWNED AS QUEEN OF ALL AMERICA, YOU CAN BE SURE THAT THE CRITICISM WILL STOP BECAUSE I WILL LEGALLY COMMAND IT.  NOW BOW BEFORE ME, SWINE, BOW!"

The report from the Iraq Inquiry continues to dominate the news on/from Iraq despite being released last Wednesday, one week ago.


Wes and Helen Holmes (BELFEST TELEGRAPH) write a letter to the editor noting that the blame can be spread around beyond Tony Blair:

Ours is a parliamentary democracy and the resolution to go to war was determined by our political representatives.
As the decision was a shared one, the blame also must be shared.
Given that vast numbers of innocents are dead as a consequence of the invasion it is not sufficient for those responsible to claim they were duped.


They're certainly correct about their type of government.

But of all of them: Bully Boy Bush and Tony Blair would be at the top.  (Barack would be immediately below them because the Iraq War goes on.)

As for who would be at the top?

Bully Boy Bush was a laughingstock on the world stage.

He needed Blair as an ally to sell the war.

The so-called coalition of the willing would have been next to nothing without Blair.

Blair was deceitful and a liar -- as most of New Labour is and was.

He sold out the people in one neoliberal scheme after another.

But he could have held onto the myth were it not for the Iraq War.

Had he not made the promise long before the war started -- as documented in the report from the Iraq Inquiry -- to stand with Bully Boy Bush no matter what, it's very possible the war would not have started.

France already was thought unwilling to take part (the report throws doubt on Blair and Bush's assumptions there).  To have also not had the longterm ally of England?

It would have been much harder to get the war off the ground.

The war machine in the US -- which does include the media, never forget that: 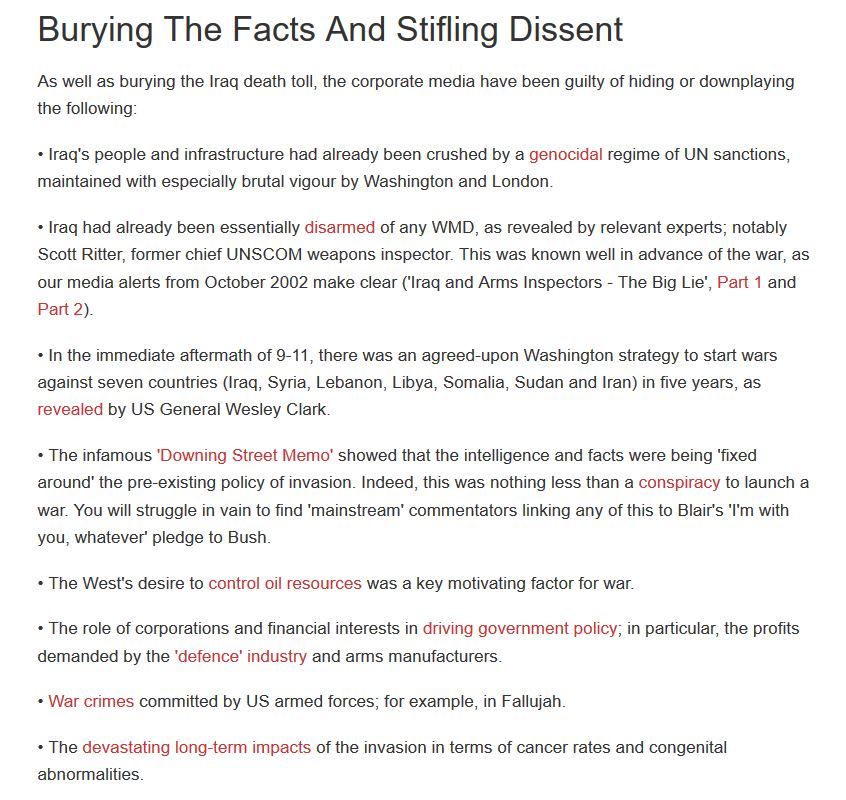 
The war machine had already slimed the French.  If they had then done the same with the British, late night comics would have had a field day with who was next and Americans would have been even more suspicious of the impending war.

Bully Boy Bush was seen as a deranged cowboy.

Blair was seen as a wise and thoughtful leader.

Without Blair by his side, a case can be made that the Iraq War would not have started.

RECOMMENDED: "Iraq snapshot"
"Parliament is back in session"
"THIS JUST IN! SHE'S THE MOST WANTED!"
"Clinton feels the love"
"Looks like I'll be voting for Jill Stein"
"Gen X-ers you need to support Jill Stein"
"It's on them"
"The sure thing may not deliver"
"It's hers to lose now"
"No difference between Hillary and Bernie"
"Bernie Scam Sanders"
"put jill stein and gary johnson in the debates"
"Bernie the Bum"
"THE FREE STATE OF JONES"